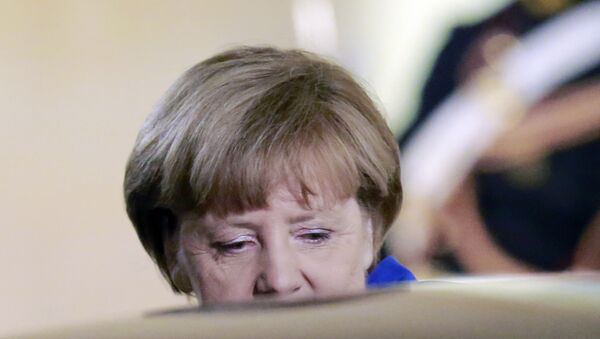 German Chancellor Angela Merkel has been heavily criticized after climbing down over the issue of refugee transit zones, in an effort to close a major rift within her own coalition government and suggesting processing asylum-seekers within weeks.

Merkel has courted criticism for wanting to set up transit zones on Germany’s borders, where asylum-seekers would be kept until they had been processed. Refugees genuinely fleeing war zones – mainly Syrians – would be accepted, but economic migrants and others would be sent back to where they came from.

Her policy was opposed by her coalition partner the Social Democratic Party of Germany (SPD) led by Sigmar Gabriel, who said the transit camps would be like detention centers and resemble concentration camps.

Meanwhile, another rift opened up within her own CDU/CSU Union party, with Bavarian CSU leader Horst Seehofer demanding more action from Berlin to deal with the tens of thousands of refugees swarming into the southern state from Austria.

Talks over the past week between the three leaders came to a head Thursday night when Merkel – in an attempt to dispel the biggest crisis in her leadership – backed down over transit camps and agreed to set up refugee centers and speed up the processing of refugees and the deportation of those refused asylum. 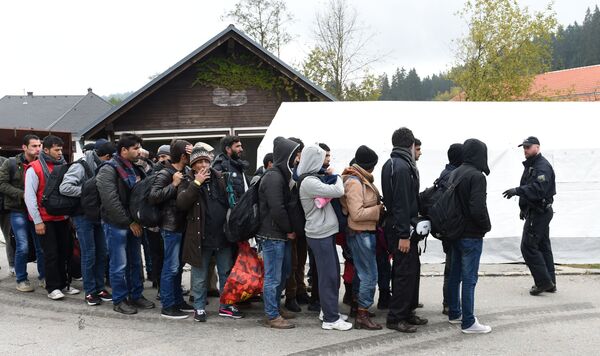 German police officer instructs migrants ahead of their walk from the Austrian-German border to a first registration point of the German federal police in the small Bavarian village Wegscheid, southern Germany, on October 20, 2015
© AFP 2022 / CHRISTOF STACHE

The compromise will mean that refugees will be processed within weeks, rather than months, although critics question how the status of an asylum-seeker can be established so quickly.

"In other countries, most people have to wait a year before they can even apply for asylum. In this context, it is a complete mystery how the Federal government intends to conclude the process at special registration centers within a few weeks."

However, Merkel received some consolation when leading economists said the refugees the country did accept would prove a long-term benefit for the country.

Marcel Fratzscher, the head of the German Institute for Economic Research said the new arrivals represented a major opportunity.

"In the long run the refugees are an incredible opportunity for Germany. Because of the surplus in the public budget, and a labor market that’s doing incredibly well, there’s probably never been a better moment in the last 70 years for Germany to deal with the challenge."