Alienation and Naivety: ISIL Has Rich Pickings From Western Youth 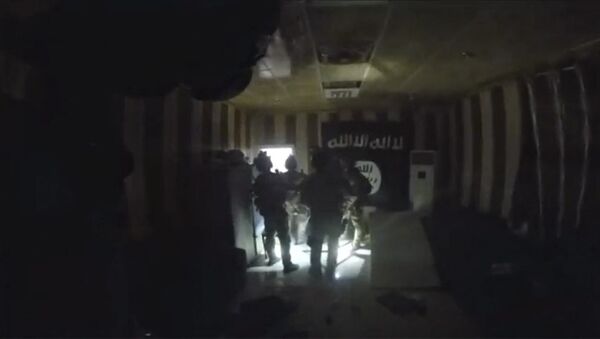 © REUTERS / Kurdistan Region Security Council
Subscribe
A political analyst told Sputnik that over thirty thousand foreign fighters from over a hundred countries have been recruited by the Islamic State.

US Found Questionable Allies in Fight Against ISIL in Syria - German Media
Peter Mathews, a political analyst and professor of Political Science at Cypress College, pointed out that while the largest contingent of foreign ISIL recruits – approximately 2,500 people — comes from Saudi Arabia, there are also 3,400 volunteers from Western countries who joined the group.

"I think there are different kinds of recruits but there are two major ones. There are of course ones who believe that they’re creating something historical, and they get involved with its ideology, and they go there to fight, and they play prominent roles," Mathews said.

"And then you’ve got other kind of recruits who come to the Internet – younger, much more vulnerable people like the young women or seventeen-year-olds who’re going to have children, to go there and get married and to have children for this so called Islamic State which they see as something that’s being created for the future."

According to Mathews, out of all of the European countries, France became the largest contributor of recruits to the Islamic State.

"Actually, France contributed about twelve hundred of them, and Britain about six hundred, and the numbers then go down from there," he said, pointing out that "countries as small as Belgium" contributed a relatively large number of recruits compared to the total number of people who actually live there.

Many young people are apparently motivated to join the Islamic State because of the alienation that they experience in Western Europe, Mathews believes.

"For example in Britain many young people of Islamic ancestry become radicalized because they’re not fully integrated into society," he observed, adding that even the UK Prime Minister David Cameron had acknowledged this problem.

"But more than that there’s an ideological pull as well, and these young people are a lot more naïve, some of them actually think they know what they’re doing," Mathews added. "And yet these societies have to integrate their immigrant population one hundred percent, to keep these countries and the world safe."

According to Professor Mathews, a good example of a strategy aimed at preventing these young people from joining the Islamic State would be to integrate them into the job market and into Western society, and "to have physical attributes to find out who’s going there, and who are they and how to stop them from actually going there."

"There is a two pronged approach. One is to bring in the cultural assimilation that people need to feel that they’re a part of the country, that they were born in that country, and to make them a fabric of society, which means more opportunities – economic and social – and less discrimination. And the other of course, is physically being able to track down these people and prevent them from going back, or if they do, then find out who they are and put a stop to it because it’s very dangerous."