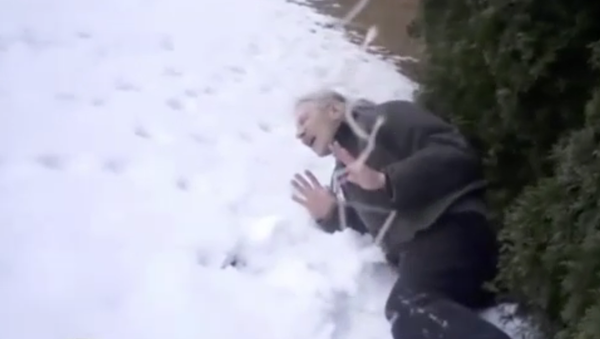 © Screenshot
Subscribe
A police officer who shot and killed an unarmed man as he lay face down on the ground, having just been tased, was acquitted of murder on Thursday.

Hummelstown, Pennsylvania Police Officer Lisa Mearkle, 37, was charged with third-degree murder, voluntary, and involuntary manslaughter after executing 59-year-old David Kassick when he attempted to flee from a traffic stop in February.

Following her acquittal, Mearkle cried and stated that she didn’t want to shoot the unarmed man.

"I feel relief right now, but it's going to take a little bit for me to get back to my normal self, this has taken a toll on me that nobody understands,” Mearkle told reporters at the courthouse. “I truly wish it didn't happen. I want them to know that. I didn't want to shoot anybody."

Kassick had been tased, and when he fell to the ground his hands disappeared under his body. Mearkle claimed that she believed he was reaching for a weapon.

The incident began when Mearkle attempted to pull over Kassick for expired vehicle registration.

Eventually Mearkle caught up to the motorist close to his sister’s home, where he was staying, but Kassick got out of the vehicle and fled on foot.  As he was attempting to run away, he was incapacitated by the officer’s taser, which she held in her left hand. With her right hand, she pulled out her service gun and shot the unarmed man twice in the back as he lay face-down on the ground.

It remains unknown why Kassick fled, but investigators did find a syringe on his body and drugs and alcohol in his system. His family has admitted that he struggled with addiction, a personal problem which they say should not have cost him his life.

Mearkle has been on unpaid leave since the shooting, and has now stated that she intends to remain a police officer.

000000
Popular comments
Neil McGowan, You might want to do some research on the subject before commenting.

Baybars
7 November 2015, 01:02 GMT
000000
Mearkle claimed that she believed he was reaching for a weapon. -- I don't think they changed the law. The cop has to SEE a weapon or believe he are in imminent danger, which she wasn't. Wow. She completely lost control. I don't think she even realized she was firing her weapon. How is he supposed to comply if she won't stop tasering him? Her voice was shaking and she just completely lost it. Should never be a cop.
jas
7 November 2015, 03:53 GMT
000000
Newsfeed
0
New firstOld first
loader
LIVE
Заголовок открываемого материала
Access to the chat has been blocked for violating the rules . You will be able to participate again through:∞. If you do not agree with the blocking, please use the feedback form
The discussion is closed. You can participate in the discussion within 24 hours after the publication of the article.
To participate in the discussion
log in or register
loader
Chats
Заголовок открываемого материала
Worldwide
InternationalEnglishEnglishMundoEspañolSpanish
Europe
DeutschlandDeutschGermanFranceFrançaisFrenchΕλλάδαΕλληνικάGreekItaliaItalianoItalianČeská republikaČeštinaCzechPolskaPolskiPolishСрбиjаСрпскиSerbianLatvijaLatviešuLatvianLietuvaLietuviųLithuanianMoldovaMoldoveneascăMoldavianБеларусьБеларускiBelarusian
Transcaucasia
ԱրմենիաՀայերենArmenianАҧсныАҧсышәалаAbkhazХуссар ИрыстонИронауОssetianსაქართველოქართულიGeorgianAzərbaycanАzərbaycancaAzerbaijani
Middle East
Sputnik عربيArabicArabicTürkiyeTürkçeTurkishSputnik ایرانPersianPersianSputnik افغانستانDariDari
Central Asia
ҚазақстанҚазақ тіліKazakhКыргызстанКыргызчаKyrgyzOʻzbekistonЎзбекчаUzbekТоҷикистонТоҷикӣTajik
East & Southeast Asia
Việt NamTiếng ViệtVietnamese日本日本語Japanese中国中文Chinese
South America
BrasilPortuguêsPortuguese
NewsfeedBreaking
06:10 GMTReports Reveal Name of Suspect in Sir David Amess' Shocking Assassination
06:02 GMTJapan's New Prime Minister Visits Crippled Fukushima Nuclear Plant
05:46 GMTBoris Johnson, Chancellor Sunak Reportedly at Odds Over Cost of UK Moving to Carbon-Free Economy
04:59 GMTSoyuz Spacecraft With First Feature Film Crew in Space Returns to Earth
04:30 GMTYou Shall Not Pass: Cat Boxes With Cute Shiba Inu
03:54 GMTFormer UT Professor Offered Job Back After Being Cleared of Inappropriate Ties With Beijing
02:53 GMTBiden Says It Is Harder Than Ever to be a Cop in America
02:52 GMTChina Tested New Space Capability With Hypersonic Missile in August - Report
01:49 GMTSoyuz Spacecraft With Film Crew Leaving International Space Station
00:33 GMTVienna Flaunts its ‘Explicit’ Artworks on OnlyFans Amid Censorship on Nudes
YesterdayVenezuelan Government to Suspend Negotiations With Opposition Over Extradition of Alex Saab to US
YesterdaySyria Accuses Israel of Killing Head of Cabinet’s Golan Affairs Office - Reports
YesterdayRobert Durst on Ventilator Battling COVID-19, Amid Life Sentence, Lawyer Says
YesterdayBill Clinton to Remain Hospitalised Until Sunday - Spokesman
YesterdayTexas Senate Passes Athlete Bill Targeting Transgender Youth
YesterdayNew Satellite Images Reportedly Show That Trump's Scotland Golf Course Wrecked a Sand Dune System
YesterdayAt Least 10 People Dead, 18 Missing in India's Kerala Due to Bad Weather - Reports
YesterdayPablo Escobar's 'Cocaine Hippos' Breeding Out of Control
YesterdayIsraeli Army Creates Secret Base to Monitor Iran's Activities - Reports
YesterdayMacron Slams 1961 Paris Police Killing of Algerian Protesters as 'Inexcusable' - Office