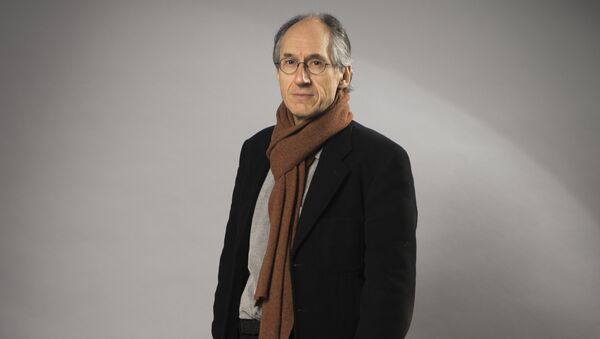 © AFP 2023 / MARTIN BUREAU
Subscribe
International
India
Africa
The editor-in-chief of the French satirical magazine Charlie Hebdo, Gerard Briard, said Friday that the cartoons he published depicting the Russian airliner crash that killed 224 people in Egypt were not intended to mock the victims but merely to convey the weekly’s take on the event.

French Authorities Distance Themselves From Charlie Hebdo A321 Cartoons
PARIS (Sputnik) – In its latest issue, the notorious French magazine published two cartoons of the Airbus A321 tragedy, one of which compared Saturday’s air crash to Russia’s military operation targeting terrorist positions in Syria.

"The notion of ‘blasphemy’ means nothing to us. We comment on the news, like any outlet," Briard said in an article published by the French broadcaster RFI.

He added the cartoons were not caricatures mocking those who died in the plane crash, but a depiction of the magazine’s perception of Saturday events. The airliner came down over Egypt's Sinai desert, prompting fears of a terrorist attack.

Charlie Hebdo gained worldwide attention after a January shooting spree at its Paris office that killed 12 people, including then editor-in-chief Stephane Charbonnier. The gun attack is believed to have been motivated by the outlet's publication of cartoons of the Prophet Mohammad.