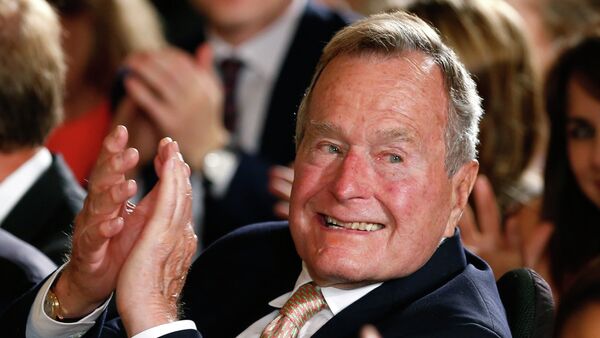 © REUTERS / Kevin Lamarque/Files
Subscribe
While you might expect George H.W. Bush to regard his son’s presidency fondly, a new biography reveals otherwise.

Over a decade since the US-led invasion of Iraq, George W. Bush has his fair share of detractors.  Held largely responsible for destabilizing the Middle East, Bush and the chief architects of his administration – namely Vice President Dick Cheney and Defense chief Donald Rumsfeld – may not be remembered well by history.

All in The Family: George W. Bush to Headline Campaign Event for Jeb

According to book about former President George H.W. Bush, compiled from a series of interviews, the 41st president has harsh words for his son’s administration, as well.

In the book, he criticizes W. Bush’s "hot rhetoric," in particular the 2002 speech in which the president described Iraq, Iran, and North Korea as comprising an "Axis of Evil." The elder Bush said the speech contained comments "that might be historically proved to be no benefitting anything."

Rumsfeld didn’t fare much better. Bush described him as an "arrogant fellow" who "served the president badly."

"I don’t like what he did, and I think it hurt the president having his iron-ass view of everything," he said. "There’s a lack of humility, a lack of seeing what the other guys thinks."

Cheney, who served as Secretary of Defense under George H.W. Bush’s administration,  is also described as a bull-headed "iron-ass."

"Just iron-ass," Bush said. "His seeming knuckling under to the real hard-charging guys who want to fight about everything, use force to get our way in the Middle East.

"[Cheney] had his own empire there and marched to his own drummer. He just became very hard-line and very different from the Dick Cheney I knew and worked with."

Still, the elder Bush stressed it was ultimately the president’s responsibility to reign in the influence of the vice president.

"It’s not Cheney’s fault, it’s the president’s fault," he said. "The buck stops there."

The timing of the book is sure to complicate things for Jeb Bush, currently running a floundering presidential campaign of his own. Confronted with questions over the legacy of his brother’s administration, Jeb has already proven to be almost blindingly loyal. Defending the invasion of Iraq hasn’t gone over well with an electorate still weary of engagement in foreign wars.

Another interesting tidbit from the new book is a story about one individual who pursued the idea of becoming George H.W. Bush’s vice president before Dan Quayle was chosen. That individual? A young Donald Trump.

According to the book, Bush found that idea "strange and unbelievable."

000000
Popular comments
Cheney Iron assed? Try deliberately collaborating with Mossad , certain big businessmen, and global elite for 911. All the info is out there now, including that some tenants of the twin towers were prewarned. And Mossad was cought with a explosives filled white van heading to the George Washington bridge, then all the agents were let go 'deported'. To many Dick Cheney = 911. The Bushes "if they new what we were doing they would hang us' could have stood up to the other oligarchs, but they made their choice, to go with and advance the NWO. Throwing the blame at others doesn't hack it, they had their chance to stand up to that tyranny instead of being part of it.