Keystone XL Shut Down Thanks to Grassroots Environmental Activism 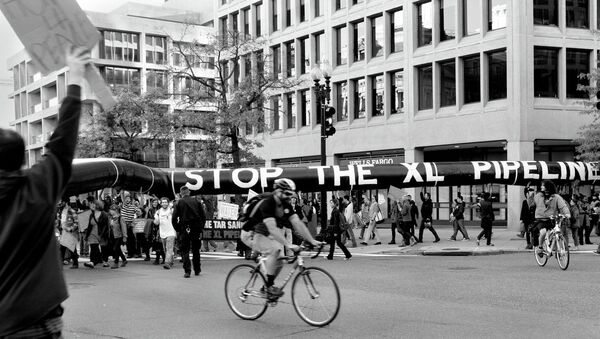 © Flickr / tarsandsaction
Subscribe
US President Barack Obama’s decision to pull the plug on the Keystone XL oil pipeline -- an extremely contentious issue among those concerned with climate change and the environment -- would never have happened if it weren’t for the work of grassroots activists, investigative reporter Will Potter told Sputnik.

The 1,179-mile pipeline, which according to proposals would have carried 800,000 barrels of carbon-heavy tar sands oil across the Canadian border to the United States every single day, has led to over 750 protests since 2011.

Activists long argued that Keystone XL would pipe some of the world's dirtiest oil through America to be refined on the Gulf and shipped overseas, meaning that it would also put people here at risk without any benefit at home.

“The pipeline would not make a meaningful long-term contribution to our economy,’’ President Obama said on his decision to reject the creation of the pipeline.

Heading into the last year of Obama’s presidency, his actions on climate change have been significant.

In August, for example, he announced a climate policy involving aggressive regulations to cut carbon pollution emissions from power plants across the country.

A bipartisan majority of lawmakers had supported the Keystone XL project, citing that it would create jobs and give a boost to the economy. However, it seems as though Obama could not ignore the calls of the massive grassroots movement.

Will Potter, a journalist at Green is the New Red, told Sputnik he credits Obama’s decision to the hard work of activists nationwide, and hope’s that it energizes more people to stand up for our environment.

"This could never have happened without the hard-fought campaigning of grassroots environmental groups across the country,” Potter said. “The rejection of the Keystone XL is a victory in and of itself, but I hope its legacy will be of escalating and intensifying environmental activism in the US, and reminding the American public of what is at stake if we sit quietly."

“Once the grass-roots movement on the Keystone pipeline mobilized, it changed what it meant to the president,” Douglas G. Brinkley, a historian at Rice University who writes about presidential environmental legacies told the New York Times. “It went from a routine infrastructure project to the symbol of an era.”

Lobbyists for the oil industry on the other hand, are livid.

Trudeau Hopes for ‘Fresh Start’ With Obama After Keystone Rejection

“He has thumbed his nose at more than two thirds of Americans who support reducing energy imports from unfriendly nations; who support job creation; who support friendly relations with our Canadian neighbors; who support regulatory decisions based on science, not politics; and who support big ideas and big achievements,” Michael Whatley, vice president of Consumer Energy Alliance, a group that lobbies for the fossil fuel industry, told the Times.

Despite the oil lobby’s best efforts, the president disagrees.

“America is now a global leader when it comes to taking serious action on climate change,” Obama said in a statement on Friday. “Frankly, approving that project would have undercut that global leadership, and that is the biggest risk we face: not acting.”