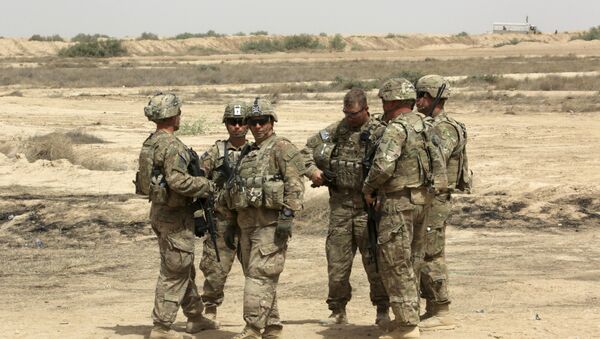 © AP Photo / Khalid Mohammed
Subscribe
The deployment of US military forces in Syria, carried out against Damascus' will, could be qualified as "an act of war" against the Syrian sovereign state, Patrick J. Buchanan warned.

Boots on the Ground: What Are Real Objectives of US Special Ops in Syria?
Regardless of repeated vows not to deploy US military forces in Syria, US President Barack Obama is sending 50 Special Ops troops to Syria, with more to follow, American conservative commentator Patrick J. Buchanan notes.

Meanwhile, with guns blazing, the Pentagon has deployed famous A-10 "warthog" attack planes in Incirlik Air Base in Turkey, close to Syria.

A chorus of American neocons accompanied by US presidential candidate Hillary Clinton, US Senator John McCain and General David Petraeus are urging Obama to establish a 'no-fly zone' and a 'safe zone' in Syria.

"Yet, if we put US forces onto sovereign Syrian territory, against the will and resistance of that government, that is an act of war," US conservative political commentator and publicist Patrick Buchanan stressed in his article for Information Clearing House.

"Would we tolerate Mexican troops in Texas to protect their citizens inside our country? Would we, in the Cold War, have tolerated Russians in Cuba telling us they were establishing a no-fly zone for all US warplanes over the Florida Strait and Florida Keys?" the publicist asked rhetorically.

NATO's Main Strategy: 'Naked Aggression' Aimed at Global Dominance
The truth of the matter is that the US president has begun an escalation into Syria's civil war, and not only against the infamous Islamic State and al-Nusra Front, but against the Syrian Arab Army, Buchanan pointed out.

What makes matters even worse, while the Russians are in Syria at the official invitation of Damascus, the US military forces have not obtained such a mandate.

"Yet, who authorized Obama to take us into this war?" Buchanan asks.

Curiously enough, neither the Syrian government requested Washington's military support, nor the US Congress have authorized President Obama to put combat troops into Syria.

The 'no-fly zone' initiative also raises questions: neither the al-Nusra Front nor Islamic State has an air force.

Thus far, Buchanan poses a question: "Against whom, then, is this Clinton-McCain no fly-zone directed, if not Syrian and Russian warplanes and helicopters?"

Hard Nut to Crack: US Geostrategists Incapable of Outperforming Putin
Does it mean that Washington is ready to order the shooting down of Russian airplanes in Syria, he asks, repeating again that the Russian Air Force is operating in Syria with the approval of the legitimate Syrian government.

"In deepening America's involvement and risking a clash with Syrian, Russian and Iranian forces, Obama is contemptuously ignoring a Congress that has never authorized the use of military force against the Damascus regime," Buchanan emphasized.

And it is not the first time the US Congress has swallowed the president's arbitrary decisions. After Congress passed the "fast track" bill, so far surrendering its constitutional rights to amend trade treaties, it remains silent about Obama's Syrian war strategy.

"Congress' meek acquiescence in being stripped of its war powers is astonishing. Weren't these the Republicans who were going to Washington to 'stand up to Obama'?… Yet in the Constitution, Congress is still the first branch of the US government," the conservative commentator elaborated.

Has anyone thought about the possible consequences of this US intervention?

"When Saddam fell, we got civil war, ISIS in Anbar, and a fractured and failed state with hundreds dying every week. And, as of today, no one knows with certitude who rises if Assad falls," Buchanan emphasized.