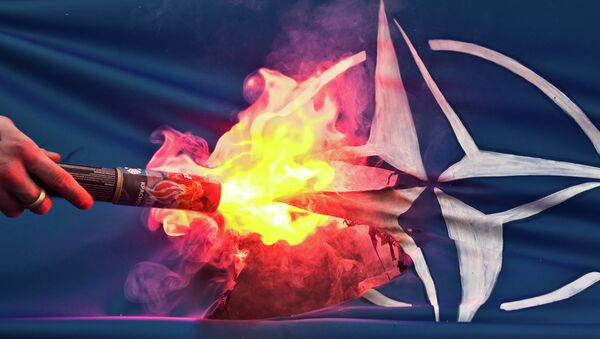 Goiko Raicevic is the leader of Montenegro Peace Movement “No to war – No to NATO” who inspired hundreds to take to the streets of Podgorica and “welcome” the Alliance’s Secretary General Jens Stoltenberg with placards signs reading “blood on your hands” on October 14. 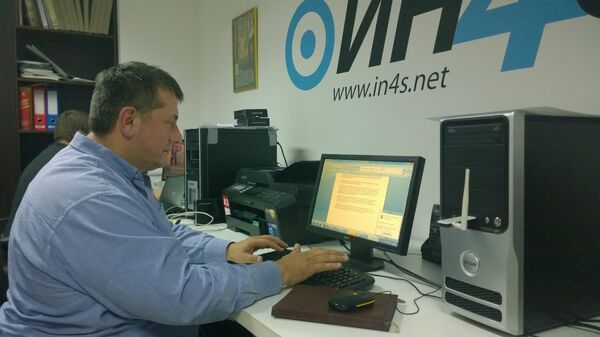 Vasily Raksha — He founded the movement in 2010 protesting against the authorities’ attempts to push the Balkan country into the military alliance. Raicevic sees three reasons why Montenegro joining NATO is a bad idea:

The first reason is that he has very fresh memories of “NATO bombing our cities, killing our citizens and destroying our economy” in 1999, when Montenegro was a part of Yugoslavia, lacerated by the US-headed bloc. The corner stone of “No to war – No to NATO” was laid in the village of Murino where six people, including three children, fell prey to the Alliance.

The second reason in his opinion is that NATO membership would contravene the very identity of Montenegro’s people and sever their traditionally close and warm ties with Russia, as “Serbs, Russians and Montenegrins have one fate and they are actually one nation”.

“The final target of NATO is the Russian Federation, and we don’t want to stay in that ultimate fight on the other side from our brothers for Russia.”

And the third reason why every civilized person should take a firm stand against the Alliance is its notorious devastating policy all over the world in the last 20 years, Raicevic said.

“Aggressive, criminal organization NATO is something that does not correspond with civilization.”

Russia, Where Have You Been?

Prime Minister Milo Djukanovic persistently advocates the membership and hopes for an invitation from Brussels in December following Parliament’s endorsement of a course on joining the bloc in mid-September.

On the one side, Raicevic explained, the hard-die leader, who has been governing Montenegro for 25 years in different positions, is a real “opportunist” who once championed unity with Serbia and supported Slobodan Milosevic and then turned his back on them, recognized Kosovo, and now he hopes to secure the West’s support for the sake of his own wealth (Milo Djukanovic ranked #20 among the world’s richest politicians in 2011, according to the Guardian).

But on the other hand, Russia was the second country after Serbia that recognized Montenegro in the wake of the 2006 referendum when Podgorica separated from Belgrade, and Moscow’s first ambassador vowed that the bilateral ties would remain intact disregarding Montenegro’s possible NATO membership.

Moreover, Russian investments in the early 2000s were used for the plebiscite, the activist said.

So the Kremlin simply lost its position and is now reaping the fruits of its own “sleepy” and short-sighted policy, Raicevic concluded, adding that the same developments were observed in Ukraine and the Baltic States.

He hinted that if Moscow wants to maintain its position and not be pushed away from the region, it should take corresponding steps to counterweight the West’s cultural expansion.

As for the West, it will continue supporting NGOs and individuals fostering the idea of Montenegro’s NATO membership even if it is rejected on a referendum, should it take place, the activist said.

Thousands Take Part in Montenegro Anti-Government, Anti-NATO Rally
Raicevic underscored that mass media often mixes the real anti-NATO demonstration with the massive protest against poverty and unemployment, which plays into the hands of the bloc. When Washington and Brussels get exaggerated reports about the anti-NATO movement, they use them as a pretext to intensify their support and propaganda, the journalist said.

Raicevic cast doubts on whether such a referendum would really depend on the people’s will. He elaborated that when Milo Djukanovic was keen of keeping integrity with Serbia in the 1992 referendum, he won, but when his policy changed, he won the 2006 referendum on secession form the State Union of Serbia and Montenegro.

Though not an EU state, Montenegro unilaterally introduced the euro as its currency back in 2002.

In May 2014, Montenegro out of the blue joined the anti-Russia sanctions sharing the policy of the EU and NATO as a candidate country, President Filip Vujanovic said. This was another “salto mortale,” Raicevic said. However, these sanctions probably didn’t reach Moscow, as both the flows of tourists (the biggest group in Montenegro, even more than neighboring Serbs) and capital from Russia have maintained their volumes.

We Will Hold Referendum to Get Out of Hell

The streets of Podgorica sport banners with politicians promoting NATO membership as a guarantee for a “secure future”. However, does the small neutral tourist paradise have any tangible threats? Raicevic slammed these arguments saying that even Turkey and Greece, both NATO members, have the pending and unresolved Cyprus issue.

“The real threat could be NATO itself.”

Moreover, Raicevic said that in the event of – “God forbid!” – Montenegro becoming a NATO member, people would use the first chance to hold another referendum “to get out of hell – NATO”.

He warned that if NATO membership is imposed undemocratically, people would consider it occupation, and; “you know what you do with occupants”.

The Osman Empire sieged Montenegrins for five centuries but never managed to break the nation’s spirit. Napoleon suffered his first defeat in Montenegro, and even Hitler and Mussolini failed to suppress them.

He slammed the allegations that Russia purportedly fueled the anti-NATO demonstration. However, it is just the opposite. While Western ambassadors hold round tables doing their best to promote their stance, including on social media, Russian diplomacy is dragging its foot, according to Raicevic.

The state-run media didn’t devote even three minutes to show the anti-government protest that ran for three weeks, Raicevic said, while it was the main news story in the country. And Serbia-run media bent the story in favor of the authorities and divided the number of protesters by 10, he said.

His informational portal ИН4С and daily ДАН are among the few sources representing opposition to NATO, and unfortunately for them, they have no support even from Serbia, as the Belgrade government is also stretched between the West and the East, Raicevic said.

ИН4С countered the government campaign on joining NATO with giant banners devoted to the 2015 Victory Day Parade in Moscow. 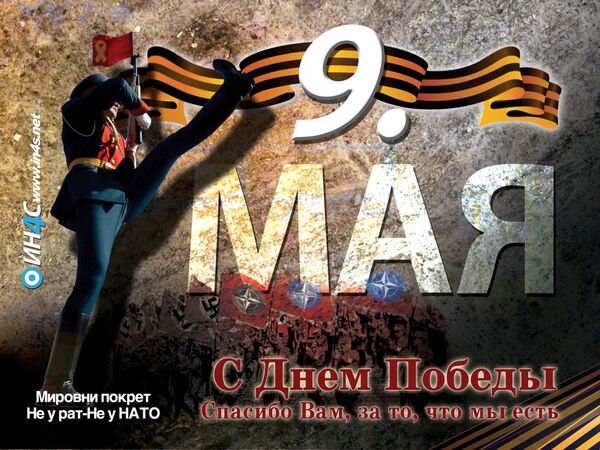 The banner hit the headlines and a group called “Montenegrin patriots” responded with a slogan “Better a banana in the hand than Russian boot on the neck”. 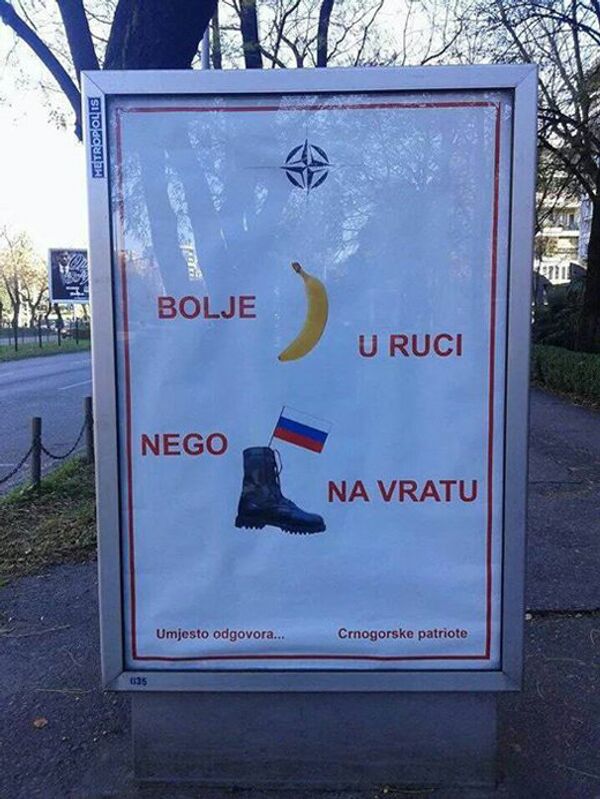 “Better a banana in the hand than Russian boot on the neck”
© Photo : srbijadanas.net

But ИН4С made another move issuing an impressive sign. 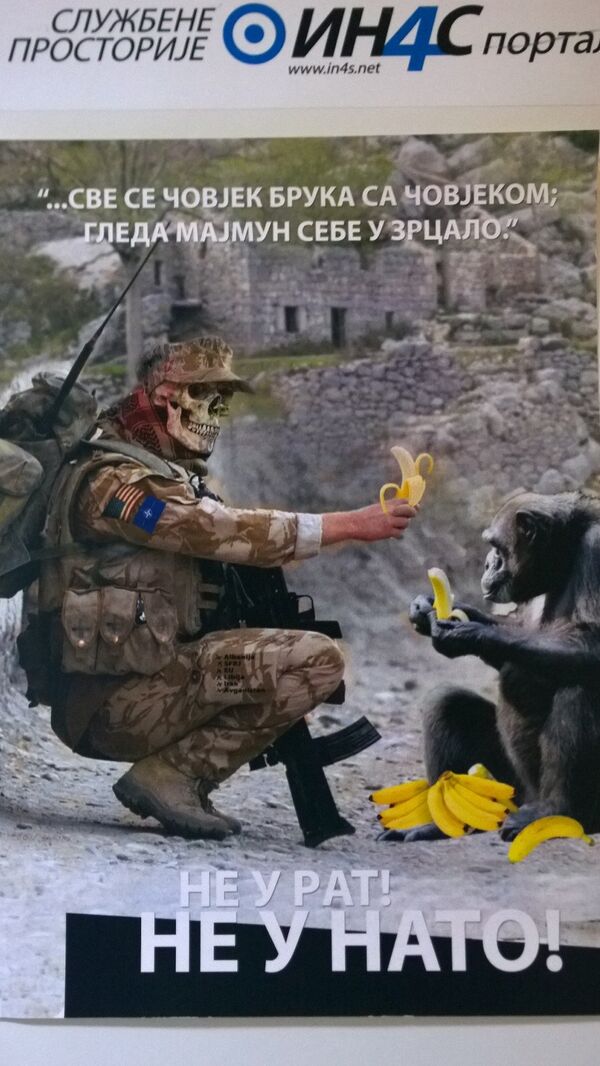 Human Rights in Montenegro? No, Never Heard of That

The organizer of the anti-NATO demonstration suffered from police brutality three times during the anti-government economic protest at the parliament (September 27 – October 17, when police removed the camp), which he did not stage. Police attacked and detained him for the first time when he was filming them reacting to the protest on October 17. A day after he received threats which turned real twice on October 24 – feeling full impunity, policemen in helmets and without ID numbers beat the ИН4С editor.

Gojko Raicevic views it as intimidation and said that the hunting season was open and in full swing. He has received a call from the OSCE and plans to inform the ambassadors of the European Commission and Russia about the incidents.

The peaceful protest was dispersed brutally with gas and physical force – something that usually always catches the West’s eye. However, the eye it caught turned blind – and the West did not see the massive violation of human rights from the side of the authorities.

Police targeted even parliamentarians including the chief of the Committee on European Integration.

Clamping down on the protest and the camp with only 50-60 people using force was a mistake, Raicevic said, as the movement was already losing momentum and the authorities could just wait for a week for the demonstration to end naturally.

In May 2015, Gojko Raicevic delivered a speech in Odessa on human rights, drawing a parallel between Montenegro and Ukraine. Referring to that speech, he now said that the tried and true tactics of divide-and-conquer were implemented again in both Ukraine and Montenegro, where Russian- and Ukrainian-speaking, Serbs and Montenegrins respectively are artificially being separated.The same strategy was applied to Ukraine and Montenegro in terms of religion, seeking to separate local Orthodox churches from Russian and Serbian ones respectively.

“This is done by dark brains in the Pentagon and their satellites in Western Europe.”

He stood against such “Ukrainization of Montenegro and Montenegrization of Ukraine” and said that he loves Ukraine.

“I love the Ukrainian people, history and culture. They have the same origin as Russia. Kiev is the cradle of the Russian state. You can’t love Russians without loving Ukrainians.”

Commenting on the refugee issue, Raicevic said that he would welcome the asylum-seekers but the responsibility was on the part of Washington that used the immigration to destabilize Europe.
Montenegro should preserve its neutrality on the international stage like Switzerland or Austria, which would secure it's safety and stability guaranteed by both NATO and Russia, Gojko Raicevic concluded.