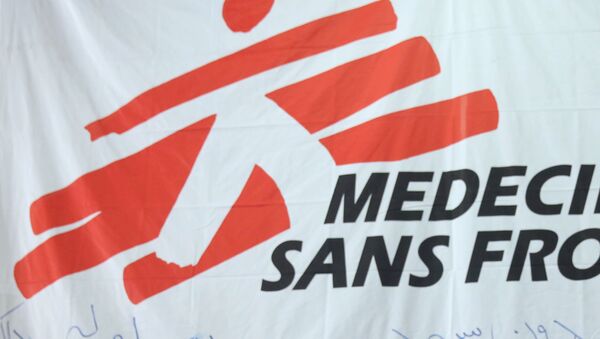 Doctors Without Borders, better known by its French acronym MSF, released a public statement which tells the details of the horrific US Army-led attack on one of its hospitals in Kunduz, Afghanistan last month.

On October 3, US forces bombed a MSF hospital in Kunduz, killing at least 30 medical staff and patients, including three children, in what might be the deadliest incident of civilian casualties since the Afghan conflict began in 2001.

"Patients burned in their beds, medical staff were decapitated and lost limbs, and others were shot by the circling AC-130 gunship while fleeing the burning building. At least 30 MSF staff and patients were killed," the statement said.

According to the MSF report, at the time of the attack the hospital had 105 patients inside. The hospital was in full control of MSF staff and acted in accordance with the organization's rules, including the "no weapons" policy. There were no armed combatants or fighting going on in or near the hospital. By any stretch of the imagination, the hospital was not a "Taliban base," as some US officials claimed after the incident.

The US airstrikes on the hospital started between 2 AM and 2:08 AM on October 3. When the first airstrikes started two of the three operating rooms were in use with three international and twenty-three national MSF staff performing surgeries in those rooms.

The first building to be hit was the Intensive-Care Unit (ICU) compound, where a number of immobile patients, including two children, were present. The airstrike killed them immediately, while those who might have survived the direct hit burned to death due to the fire that swept across the building.

One of the nurses managed to run outside and reach the administrative building, where senior international staff were woken up by the first airstrike. The nurse was covered in blood from head-to-toe with his left arm hanging from a small piece of tissue amputated in the blast; the nurse was also bleeding from his left eye and oropharynx.

US Military Knew Kunduz Airstrike Target Was a Hospital
As the airstrikes continued, MSF staff and patients tried to flee the main building of the hospital, but the US forces were circling around the area and gunning down the survivors as they came running outside. The scene was pure, unimaginable chaos: one MSF staff was decapitated by shrapnel while others tried running while on fire until they fell unconscious on the ground or were shot by the machine-gun fire from the above.

The airstrikes finally ended about an hour later. Chaos ensued.

The tragedy caused an international outcry. But despite almost universal condemnation, no Western nations have stepped forward to hold the United States accountable for its actions.

"The silence is embarrassing," MSF executive director Joanne Liu told the Thomson Reuters Foundation. "We have seen an erosion over the years of international humanitarian law. Enough is enough. We cannot keep going like this."

After the bombing, MSF appealed to 76 nations, requesting support for an impartial international investigation into the circumstances surrounding the incident. However none of the 76 countries stepped forward to show their support for an independent investigation by the Humanitarian Commission.

Although US President Barack Obama publically apologized to the MSF head, the United States is still refusing to give consent to an independent investigation.