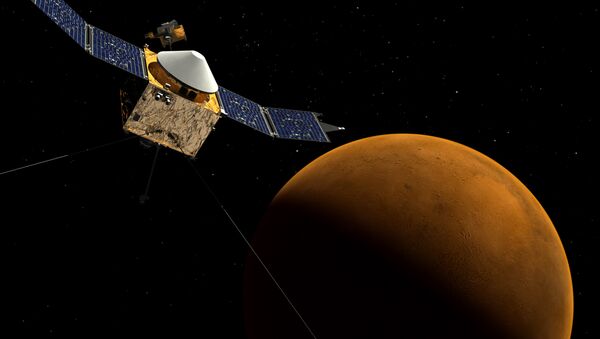 © NASA . Goddard Space Flight Center
Subscribe
NASA has captured a glimpse of a solar storm blasting away Mars' atmosphere – a discovery which may help to explain how the planet transformed from one that resembled Earth, potentially teeming with life, into a cold, dry desert.

Because Mars does not have a global magnetic field to protect its atmosphere – Earth does – the red planet is vulnerable to solar ultraviolet radiation and high-energy blasts of gas and magnetic particles that emanate from the sun during solar storms.

On March 8, NASA's Mars Atmosphere and Volatile Evolution Mission (MAVEN) spacecraft documented such a storm stripping away the planet's atmosphere, according to a report published in this week's issue of the journal Science.

The March storm was the largest of a handful of such events that MAVEN has captured since arriving at Mars in September 2014 to study radiation coming from the sun and cosmic sources and the impact on gases in Mars' upper atmosphere.

The research gives scientists some insight into how Mars went from being a warmer, water-abundant planet capable of supporting life to the arid desert that it is today.

Scientists say the water on Mars either escaped into the atmosphere or is locked in ice beneath the planet's surface.

"The single question we're really trying to get at is, did the Mars climate change… by loss to space or by some other process?" said lead MAVEN researcher Bruce Jakosky, a planetary scientist at the University of Colorado.

"By quantifying how much gas has been lost to space, we hope to be able to say whether that has been an important process."

The research should also help scientists narrow the timeframe for when Mars was most suitable for Earth-type life to evolve.