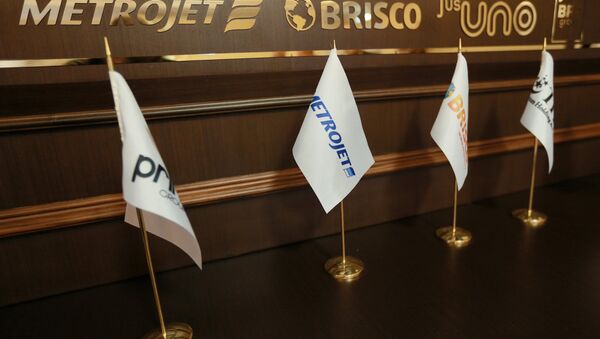 © Sputnik / Anton Denisov
/
Go to the photo bank
Subscribe
Russia's Kogalymavia airline, which operated the A321 Airbus that crashed in Egypt on October 31, has decided to suspend all flights of similar aircraft while additional checks are being carried out, Russian transport watchdog Rostransnadzor said in a statement.

Analysis of Black Box Recorders Says Engine Explosion Caused A321 Crash
MOSCOW (Sputnik) — On November 1, Rostransnadzor ordered the airline to stop operating all A321 aircraft until the watchdog’s audit of Kogalymavia's compliance to civil aviation laws has been completed. The airline was also ordered to increase its safety measures by November 3.

"As part of an unscheduled inspection of the Kogalymavia airline, Rostransnadzor committee members checked the execution of instructions to not permit the [airline's] A321 aircraft to operate until the risks have been assessed and corrective measures necessary to maintain an acceptable level of safety have been taken. In due time, the airline presented Rostransnadzor with [its internal] orders to suspend the operation of all A321 aircraft for the duration of the additional checks and corrective actions of the airline," the statement dated Wednesday reads.

On October 31, an Airbus A321, en route from Sharm el-Sheikh to St. Petersburg, crashed in Egypt’s Sinai Peninsula. All 224 people on board were killed in what has become the largest civil aviation disaster in Russian and Soviet history.

On Wednesday, the UK government concluded that the passenger plane might have crashed due to a bomb explosion, and suspended all flights to and from the Egyptian city until additional security measures had been taken.

Earlier on Thursday, Kremlin spokesman Dmitry Peskov said that no theory on the crash can be excluded.