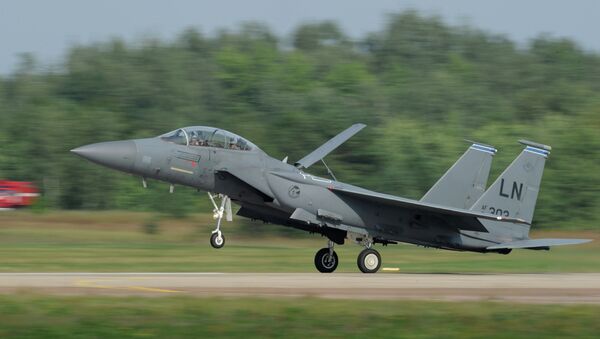 © Sputnik / Grigoriy Sisoev
/
Go to the photo bank
Subscribe
The US Air Force is deploying up to a dozen of US F-15C Eagle fighter jets to Turkey. And although the Pentagon announced that the deployment is to ‘ensure the safety’ of America’s NATO allies, the move is seen by some as a counter to Russia’s airstrikes in Syria.

On October 30, an unnamed senior US defense official said that dozens of F-15C jets would join A-10 ground attack aircraft at the Incirlik Air Base in south Turkey. Around a dozen "tank killer" A-10s landed at Incirlik in mid-October.

"I didn’t say it wasn’t about Russia," Laura Seal told The Daily Beast late Tuesday in a follow-up to comments describing the deployment as a way to "ensure the safety" of Turkish aircraft.

US Special Operations Mission in Syria Remains Classified
These F-15s will be the first American warplanes in the region that are strictly aerial fighters. The other fighters, attack planes and bombers the Pentagon has deployed—including F-22s, F-16s, A-10s and B-1s—carry bombs and air-to-ground missiles for striking militants on the ground.

“In stark contrast, the F-15s only carry air-to-air weaponry, and their pilots train exclusively for shooting down enemy warplanes. It’s worth noting that F-15Cs have never deployed to Afghanistan, nor have they participated in the US-led occupation of Iraq. The war in Syria is different,” The Daily Beast reported.

The publication contends that F-15Cs carrying air-to-air missiles and pilot training "exclusively for shooting down enemy warplanes" point to a different objective than the one originally stated.

The outlet speculated that the Eagles are likely to escort attack planes and bombers striking ISIL targets in close proximity to Syrian government forces backed with Russian aircraft. Their anticipated primary deployment is to escort Turkish patrol aircraft, "intercepting Syrian planes and helicopters that periodically stray into Turkish territory," The Daily Beast said.

000000
Popular comments
I detect the first step in trying to establish a no-fly zone, which would contradict the just released statement of goals arrived at in Vienna.
karlof1
4 November 2015, 21:53 GMT2
000000
The F-15C is a very capable fighter. The airframe dates to the mid 80s, but the avionics and electronic warfare package are state of the art. It's very comparable to the SU-35. The F-22 on the other hand is a quantum leap ahead of both of them. Regardless, it's all just political posturing for the best position when everyone sits down at the table to negotiate a settlement. Russia and the U.S. aren't going to start shooting at each other. There's nothing to gain and everything to lose. The "Cold War" stayed "Cold" for a lot of very good reasons.
coolerheads
5 November 2015, 01:31 GMT2
000000
Newsfeed
0
New firstOld first
loader
LIVE
Заголовок открываемого материала
Access to the chat has been blocked for violating the rules . You will be able to participate again through:∞. If you do not agree with the blocking, please use the feedback form
The discussion is closed. You can participate in the discussion within 24 hours after the publication of the article.
To participate in the discussion
log in or register
loader
Chats
Заголовок открываемого материала
Worldwide
InternationalEnglishEnglishMundoEspañolSpanish
Europe
DeutschlandDeutschGermanFranceFrançaisFrenchΕλλάδαΕλληνικάGreekItaliaItalianoItalianČeská republikaČeštinaCzechPolskaPolskiPolishСрбиjаСрпскиSerbianLatvijaLatviešuLatvianLietuvaLietuviųLithuanianMoldovaMoldoveneascăMoldavianБеларусьБеларускiBelarusian
Transcaucasia
ԱրմենիաՀայերենArmenianАҧсныАҧсышәалаAbkhazХуссар ИрыстонИронауОssetianსაქართველოქართულიGeorgianAzərbaycanАzərbaycancaAzerbaijani
Middle East
Sputnik عربيArabicArabicTürkiyeTürkçeTurkishSputnik ایرانPersianPersianSputnik افغانستانDariDari
Central Asia
ҚазақстанҚазақ тіліKazakhКыргызстанКыргызчаKyrgyzOʻzbekistonЎзбекчаUzbekТоҷикистонТоҷикӣTajik
East & Southeast Asia
Việt NamTiếng ViệtVietnamese日本日本語Japanese俄罗斯卫星通讯社中文（简体）Chinese (simplified)俄罗斯卫星通讯社中文（繁体）Chinese (traditional)
South America
BrasilPortuguêsPortuguese
NewsfeedBreaking
17:10 GMTJoe Biden Receives COVID Booster Shot, Delivers Remarks
17:10 GMTChina Curbs 'Not Medically Necessary' Abortions
17:04 GMTUS Deputy Secretary of State to Visit Geneva for Stability Talks With Russia - State Dept.
16:44 GMTMessi Likely to Play for PSG Against Man City in Champions League, Media Says
16:40 GMTUS Drug Enforcement Administration Warns of Fake Prescription Pills With Fentanyl, Meth
16:37 GMT'Convenient Scapegoat': Imran Khan Urges West Against Blaming Pakistan For 'Unwinnable' Afghan War
16:30 GMTFBI: US Murder Rate Increases 29% in 2020 Amid Pandemic
16:24 GMTBiden’s Domestic Agenda Faces ‘Do-or-Die’ Moment in Anticipation of Three Crucial Votes
16:06 GMTPfizer Starts Second Phase of Testing New Antiviral COVID-19 Oral Drug in Exposed Adults
16:04 GMTIran Denies IAEA Access to Karaj Nuclear Facility Due to Ongoing Sabotage Probe
15:58 GMTParis Says France Not 'Abandoning' Mali by Upgrading Its Military Presence in Sahel
15:49 GMTBiden to Receive COVID-19 Booster Shot Live on TV Monday
15:46 GMTUK to Spend Billions to Become Science & Space Superpower
15:44 GMTOne of Prince Andrew's Legal Battles Reportedly Ends
15:40 GMTTaliban Unpredictability Poses Biggest Constraint for US Evacuation Efforts, State Department Says
15:25 GMTIt Never Rains But it Pours: How Energy Crisis, Brexit & COVID May Backfire on UK This Christmas
15:08 GMTAstraZeneca, Sputnik Light Combo Causes Strong Neutralizing Antibody Response, RDIF Says
15:04 GMTChina Slams UK for Harbouring ‘Evil Intentions’ After British Warship Sails Through Taiwan Strait
15:04 GMT‘Iraq WMDs’ Architect John Bolton Claims Terrorists Could Get Nukes in Wake of US Afghan Pullout
14:57 GMTWoman Faces Up to 9 Years in Prison for Starting Cali Wildfire After Allegedly Boiling Bear Urine