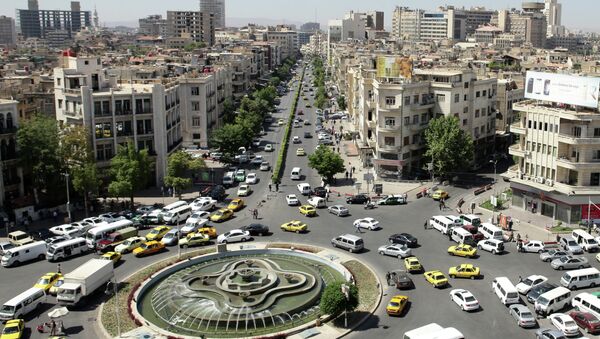 © AFP 2021 / LOUAI BESHARA
Subscribe
In Damascus, Syrians express a surprising level of optimism and most of them thank Russia for helping them, wrote Patrick J. McDonnell.

“A month of Russian involvement <…> lifted the spirit of many supporters of the government in the territory, which is the basis of the authority of Assad and home to about five million people,” he wrote.

Syrian Refugee: 'Russia is Fighting Terrorists, US is Looking for Oil'
Although the rebels are still holding the nearby suburbs of the capital under control and insecurity remains a part of life there, the famous Hamidiya market is again filled with shoppers and the streets have become busy with traffic jams on the roads, wrote the journalist.

"There is less fear now, people are coming out to more activities," said a 37 years old woman from the Dumar district, "We stayed in Syria and I'm happy we did. I think all of those who left will come to regret it."

A university student said that his friends feel more confident about the future. “People think that the worst is behind us.”

"I think it's great that Russia is helping us," said Rascha, 28, a shopper in the Hamidiya market said. "Really, people are fed up. They want it to end."

"The Russians came to help us as a friend, and we appreciate it, but we must still depend on ourselves and our God — and we will fight to the end," vowed one security guard at a checkpoint.

Pro-government residents are pleased that major world power publicly took their side against a number of enemies, including the United States and their partners, who do not want Assad to remain in power, McDonnell wrote for the Los Angeles Times.

However, many Syrians are dissatisfied with more than 40-year rule of the Assad family, who view the current government as a bulwark against the Islamic militants, the journalist concluded.