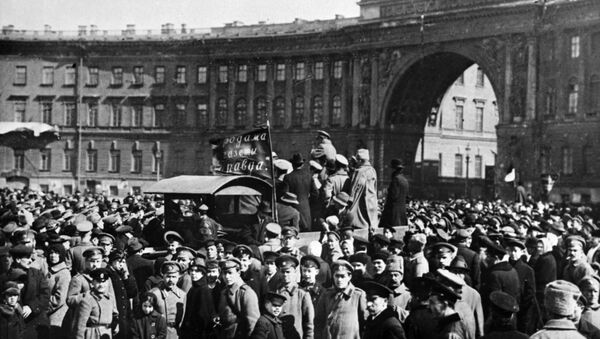 © Sputnik / RIA Novosti
/
Go to the photo bank
Subscribe
Ekaterina Blinova
All materialsWrite to the author
Rooted deeply in the past, the Russophobia trend has been used by Western elites to pressure Russia into following their dictates, Canadian academic Michael Jabara Carley told Sputnik, adding that in 1917 the Bolsheviks became in fact the true defenders of Russia's sovereignty and independence.

In fact Western Russophobia had entered into an active phase in 19th century; it had at its base a British preoccupation with Russia's perceived threat to British interests in Western and Central Asia (Turkey, Persia, Afghanistan), the contested borderlands between Russia and British colonial holdings, Canadian historian, Professor Michael Jabara Carley of the University of Montreal narrated in an exclusive interview to Sputnik.

Was Russophobia a "state-sponsored" project or did it develop naturally?

"In the 19th century public opinion, unless it was the revolutionary masses attempting to seize power, was limited to privileged elites and those who read newspapers and books.  So, basically, you could say that most public opinion was "state-sponsored," by one part of the British elite or the other," Professor Carley elaborated.

Untold Story of Soviet POWs Tormented in Polish Captivity in 1920s
In some sense London's nervousness at that time was "justified": Russia was a great power that sought to protect its national interests, strengthen its borders and expand its political influence in Eurasia.

"As a matter of fact I remember a comment from [Soviet leader Joseph] Stalin to the effect that the tsars had done very well in defending Russian national interests and in acquiring the territories that made up the Russian state in 1914. Stalin only needed to do housecleaning in effect to reacquire territories lost during the First World War and civil war. In weakness Russia tends to contract; when strong, it expanded to occupy what might be called the spaces of a Greater Russian state. This is just the danger that 19th century Britain feared," the Canadian professor explained.

However, prior to 1914 Russia might be termed a half great power, half dependent on the European states, Professor Carley underscored.

The academic pointed out that Russia was an open field of investment in banking, industry and resource extraction. At the same time it provided important markets for manufactured goods and a rich source of supply of natural resources and agricultural products. Of course, the Russian urban bourgeoisie benefited from the foreign presence in Russia.

"After the Bolshevik revolution in 1917 and the Soviet government's nationalization of banks and industry and its repudiation of the tsarist debts, the "Entente" powers focused on overthrowing Soviet authority and reacquiring various assets and investments in Russia endangered by the Bolsheviks.  The West made plans to circulate their own currencies in Russia and to take control in effect of the Russian economy," he noted.

But had the Western political establishment in any way contributed to the eruption of the February Revolution of 1917 in Russia that resulted in the abdication of Tsar Nicholas II and the end of the Russian Empire?

"Actually, the Entente powers could see the 1917 February revolution coming and feared it.  I don't think it is correct to accuse them of fomenting the February Revolution," Professor Carley stressed.

"It was only after the October Revolution that the Entente got busy trying to bring down the Soviet government by supporting various nationalities and Russian White Guards with money and arms and by direct military intervention.  The Western brokered "color revolutions" and "airstrike democracy" of the present day are nothing new.  Indeed, it was the same perpetrators, the US, Britain, and France, trying to impose their will on Soviet Russia," the Canadian academic noted. 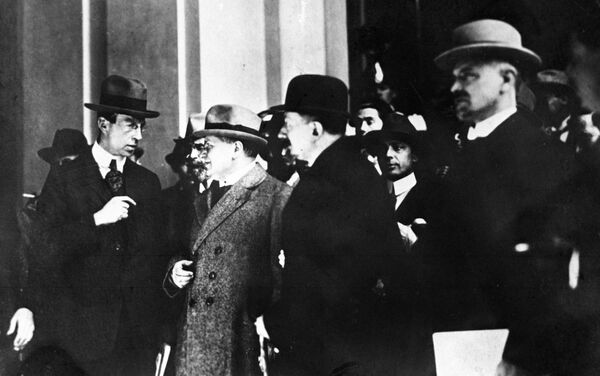 The Munich Betrayal: How Western Powers 'Sold' Czechoslovakia to Hitler
In accordance with the plans of Western banking and political elites, Russia, brought to its knees, should have become 'another China' — divided into spheres of interests by major Western powers.

And here a curious thing had happened: the Bolsheviks, who are even now being cursed by some historians for "dismantling" the Great Russian Empire became the genuine defenders of Russia's national interests. It was the Bolsheviks, not the Russian White Guards, who protected Russia's sovereignty at that time.

"In their propaganda messages to the Soviet peoples the Bolsheviks took up nationalist themes against the Entente interventionists and against Poland in 1920 when the latter launched an offensive in April intended to seize Kiev and re-establish Poland's frontiers of 1772.  It was a resumption of the Polish-Russian struggle for control of the Belorussian and Ukrainian borderlands," the professor proceeded with his narrative.

After the foreign intervention was halted and the war with Poland stalemated, the Soviet government faced with the necessity to rebuild the ruined Russian economy. Needless to say, it also needed to restore trade ties with the West.

"The US, Britain, France, yes, you know, the same old gang, thought they could impose their conditions on Moscow and re-establish their dominance over the Russian economy," Professor Carley emphasized.

"The Soviet government, as I point out in my recent book, Silent Conflict, maneuvered very well, through skilled diplomats, like G. V. Chicherin, M. M. Litvinov, L. B. Krasin, amongst others, to fend off the predacious Entente powers while advancing Russian economic and political interests.  The Entente had tried to recover its privileges in Russia "by the sword," i.e., by foreign intervention, as Litvinov put it: when that did not work they tried other economic means of pressure," the professor underscored.

"You broke into our house, Litvinov told one Western interlocutor, 'smashed all the crockery and furniture and left as beggars' and then you demanded to be indemnified for damages," Professor Carley quoted the prominent Soviet diplomat.

Professor Carley called attention to the fact that little has changed since M.M.Litvinov said these words in the 1920s. "The US and its EU satellites are still trying to dictate terms to Russia," the academic underscored. 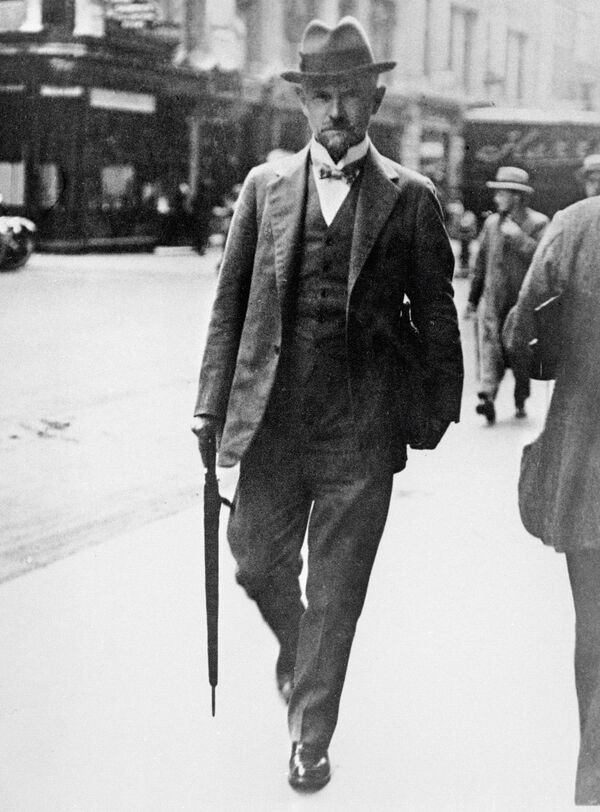 Joseph Stalin: 'Be Strong or be Beaten'

"I am no defender of Stalin and especially not of the violence which he meted out to his own people," Professor Carley remarked, stressing that "sometimes he was a stern defender of Russian independence and sovereignty."

The professor proceeded with citing the Soviet leader: "The history of old Russia," Stalin said in a famous speech in 1931, "consisted… in her being ceaselessly beaten for her backwardness.  She was beaten by Mongol khans… the Turkish beys… Swedish feudal leaders… the Polish-Lithuanian lords… the Anglo-French capitalists… by Japanese barons.  Everyone gave her a beating for her backwardness…." It's the "wolf's law of capitalism," Stalin said, be strong or be beaten.  The French call it "the law of the strongest," and as the US likes to demonstrate, it is the fundamental principle of relations between states," the Canadian academic underscored.

The professor added with a touch of irony that although Stalin was not wrong while saying it, he could have also mentioned that very often those who invaded Russia (even the Mongols eventually) fared badly.

Untold Story of Molotov-Ribbentrop Pact
"Remember the false Dmitrii, Charles XII, Napoleon, amongst others: it's a long list.  President Putin won't cite Stalin, of course, but he understands the principle very well which is why he is trying to strengthen the Russian economy and to reorganize and strengthen Russia's armed forces," the academic elaborated.

Can we say that today Russophobia has caught a second wind?

"I don't think Russophobia has got a second wind; I think it has always been present," the professor told Sputnik.

Professor Carley underscored that the West has misinterpreted Russia's leadership intentions and misunderstood Vladimir Putin. Of course, Russia has no interest whatsoever in threatening anyone (except ISIL terrorists). Pesident Putin only wanted to integrate Russia — politically and economically — into Europe, as a European state, but without becoming an American "satellite," the academic emphasized.

"The Americans resent Putin's presumptuous idea that Russia should be strong and independent again, and so they have tried to administer lessons of various sorts, like sanctions, to take Putin down a peg, show him his place… and Russia's place.  Russian assistance to the Syrian government in fighting Jihadi marauders, effectively backed by the US and its various vassal states, is yet another example for Washington of Putin's presumption," the Canadian professor told Sputnik.

"It gets personal in Washington where the American deep state siloviki are trying to figure out ways to get 'round the predicament into which Putin has now placed them in Syria.  They've been caught red-handed backing the Salafi Jihadists," he added.