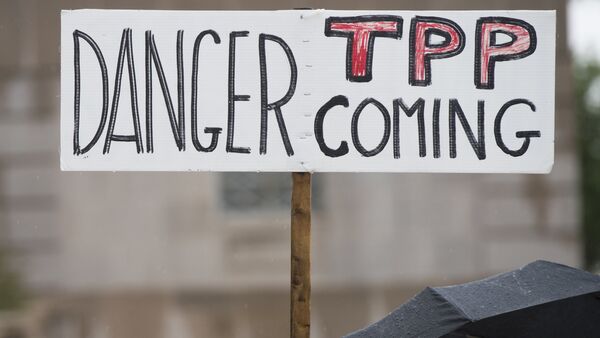 © AFP 2021 / Saul Loeb
Subscribe
The US invited Russia and China to join the Trans-Pacific Partnership (TPP). According to political expert Alexei Skopin, the United States pursues its own goals creating such partnerships and does not always declare them openly.

"We invite people to join various initiatives, such as, for example, the Trans-Pacific Partnership. We invite China, we invite Russia, we invite other countries that would like to join, if they agree to raise standards," the US politician said

The Agreement on the Trans-Pacific Partnership, which includes 12 countries so far, was reached on October 5 and is designed to create a free trade area (FTA) in the Asia-Pacific region. Participants to the agreement are currently the United States, Canada, Mexico, Peru, Chile, Japan, Malaysia, Brunei, Singapore, Vietnam, as well as Australia and New Zealand.

Political expert Alexei Skopin, however, believes that by creating such partnerships, the US is trying to maintain its influence in the world economy.

"We still have not seen a single document in which everything would be more or less clear. It seems to me that there is global deception going on here again, which is about the US keeping the dollar area in the global economy by all means. And they don’t see any other ways now but to create Trans-Atlantic and Trans-Pacific partnerships," Skopin said in an interview with Radio Sputnik.

Along with that, in his opinion, the United States may pursue some hidden goals. He believes that Russia's joining the TTP will not have any advantages.

"The Trans-Pacific Partnership is all nonsense," Skopin said, adding that such partnerships usually don’t prevent the US or the EU from imposing sanctions at the most unexpected moments.

"Well, we will enter into another kind of free trade area. But where is the guarantee that the United States or other members of the Partnership will not impose sanctions at some critical moment for us? There is no guarantee for that," the expert concluded.