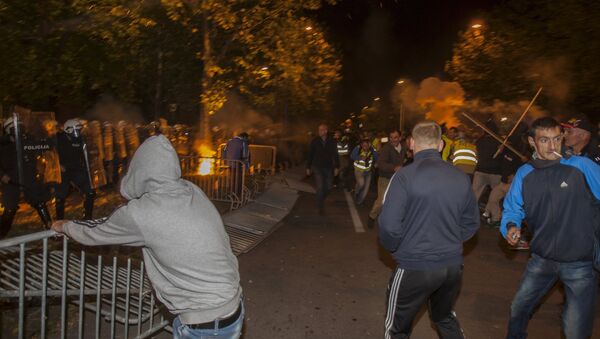 © REUTERS / Stevo Vasiljevic
Subscribe
International
India
Africa
The expansion of NATO has nothing to do with providing stability to the Balkans or Central European region, the Serbian ambassador to Russia said Tuesday.

MOSCOW (Sputnik) — Russia has repeatedly expressed concern over NATO’s growing military presence in Europe, warning that it could be a threat to regional and global stability.

"I cannot see the expansion of NATO as any kind of a guarantee of stability for the Balkans or Central Europe. I believe Europe should be free of military alliances, be in peace, in cooperation and in good partnership," Slavenko Terzic said at a press conference held at International Information Agency Rossiya Segodnya.

Mainstream US, EU Media Don’t Know How to React to Protests in Montenegro
The alliance has been boosting its presence in Eastern Europe, implementing a plan that includes setting up six new command and control units in Poland, Romania, Bulgaria and the Baltic statesю

Last month, the United States announced that it was prepared to extend an invitation to Montenegro to join NATO in December. The announcement triggered a wave of protests in the country.

"As for the protests in Montenegro, I do not see any foreign interference there. These are internal protests. It is an expression of the social, economic and political discontent of Montenegrin citizens. It seems to me that the reasons for this unrest are internal," Slavenko Terzic said.

It is obvious that the majority of the citizens of Montenegro are against NATO membership, he added.

On October 22, Montenegrin Prime Minister Milo Djukanovic said he believed Russia was supporting the Montenegrin opposition because it wanted to stop the country’s NATO integration.

Moscow dismissed the claims saying they were unfounded and "quite strange," according to Kremlin spokesman Dmitry Peskov.