US Offers to Help in Russian A321 Plane Crash Investigation 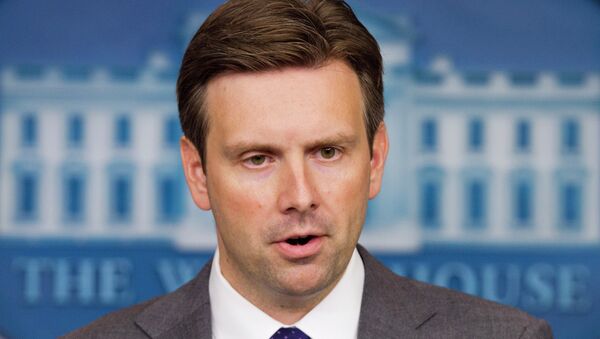 "It is an ‘open offer’," Earnest said in commenting on the support the United States could provide to the ongoing investigation of the crash.

On Saturday, an Airbus A321, operated by the Russian airline Kogalymavia, crashed in the Sinai Peninsula while flying from the Egyptian resort city of Sharm El-Sheikh to St. Petersburg. All 224 people on board have been confirmed dead in what has become the greatest civil aviation catastrophe in Russia’s history.

People Bring Flowers, Candles to Russian Embassy in US After A321 Air Crash
Egyptian aviation authorities said the airplane made a sharp descent of 5,000 feet before disappearing from radar screens.

US National Intelligence Director James Clapper said the Islamic State terrorist group, which operates in the Sinai Peninsula, may be capable of shooting down an aircraft like the Russian Airbus.

Earnest noted the White House is aware of claims of responsibility for the crash by Islamic State terrorists.

Rather than speculating, he added, the Obama administration is "going to let the investigation move forward."

On Monday, Kremlin spokesman Dmitry Peskov said that Moscow cannot exclude any cause behind the A-321 crash.