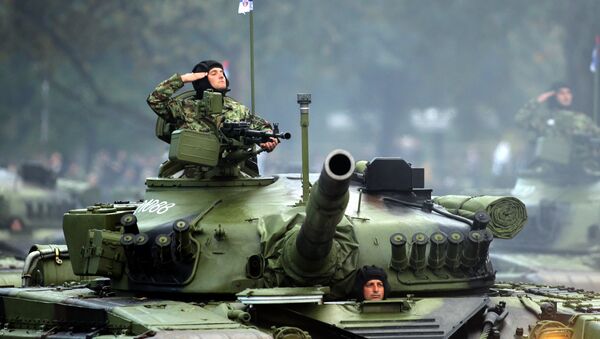 As Serbia has signed an agreement with Moscow to buy Russian weapons, Serbian soldiers are preparing to participate in US-led NATO drills. Serbia’s policy of balancing between Russia and the West is due the country’s doctrine of military neutrality adopted in 2007. However, experts say that sooner or later Belgrade will have to choose a side.

EU Puts Pressure on Serbia to Drop Trade Area Deal With Russia
During his visit to Moscow, Serbian Prime Minister Aleksandar Vucic reached an agreement with Moscow on the purchase of Russian weapons. At the same time, Serbian troops are getting ready to participate in a NATO military exercise in Germany.

Experts say military ties with Russia will not endanger Serbia’s European perspective, but warn that balancing between Moscow and the West cannot be a long-term policy.

Serbia’s decision to buy Russian arms will not be a great concern for the EU as Serbian officials have repeatedly said that EU membership remains the strategic goal, Zoran Dragisic, a security studies professor in Belgrade, told Balkan Insight.

"Serbian officials have told the same thing to their Russian partners. However, Serbia is not a member of the EU at the moment and is trying to sit in two chairs. I do not think it is possible in the long run," he said.

Military analyst Aleksandar Radic also said that the purchase of Russian weapons by Serbia is unlikely to worsen relations with the West.

"There is no need to think it will worsen our relations with the EU because Serbia cooperates with NATO a lot more than it does with Russia when it comes to military drills and equipment," Radic was quoted as saying by Balkan Insight.

According to Vucic, Serbia intends to buy Russian weapons and military equipment to maintain "a security balance" in the region, after Croatia purchased new military hardware.

However, Vucic underscored that Serbia will not buy offensive weapons.

NATO Hopes to Return to Constructive Cooperation With Russia
According to the Russian newspaper Kommersant, Russian and Serbian officials signed a memorandum of understanding that will allow Russia to intensify its arms supplies to Serbia.

At the same time, nearly 100 Serbian infantry troops are getting ready to take part in a US-led NATO drill in Germany. Soldiers from Albania, Bulgaria, Romania, Montenegro and Slovenia will also join the exercise.

Not everyone believes that new military deals with Russia are good for Serbia, the article read.

The Center for Euro-Atlantic Studies, a Belgrade think tank, urged the Serbian government not to sign any economic agreement with Moscow which could violate Western anti-Russian sanctions imposed over the Ukrainian crisis. Such agreement would endanger the negotiation process on Serbia’s EU membership.

"One should not forget that even some NATO country members, which were the members of the Warsaw pact, still have Russian weapons as well. Replacing the weapons is an expensive and timely process. Bulgaria, Hungary and the Czech Republic have yet to do so, therefore no one can expect Serbia to do it," Dragisic told Balkan Insight.

NATO Denies Plans to Increase Troops Near Russia
In 2007, Serbia adopted a military neutrality doctrine, and the government has no plans to change it.

"We have had joint exercises with the Russians and with NATO, and our military personnel underwent training programs both in Russia and in the US," Gasic told the Serbian daily Blic in August.

However, Dragisic underscored that cannot be a long-term policy.

"We will soon find ourselves in a situation where we will have to clearly choose sides," he concluded.