Airbus A321 Crash in Egypt: ‘Aircraft Was Flying Over a Danger Zone’ 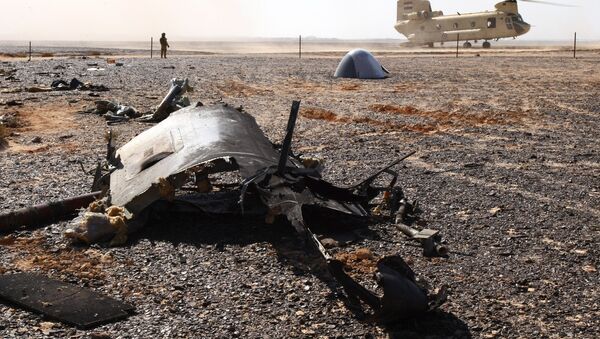 © Maxim Grigoryev
/
Go to the photo bank
Subscribe
On Saturday, Airbus Flight A-321 operated by Russian airline Kogalymavia crashed in the Sinai Peninsula en route from the Egyptian resort city of Sharm El-Sheikh to St. Petersburg.

Russian Airliner With 224 on Board Crashes in Egypt
All 224 people on board, including 25 children, were confirmed dead by Russian and Egyptian authorities.

Captain Desmond Ross, principal of DRA Aviation Services International with 40 years of aviation experience as a pilot and air traffic controller, spoke to Sputnik in an interview.

“It is still early and no one is fairly clear on exactly what happened but it doesn’t seem to me that it is a mechanical failure as it wouldn’t cause the aircraft to actually break up in flight. Mechanical failure could cause a rapid descent of some sort which is perhaps why it can go out of control.”

He further spoke about the reports that ISIL may have caused the aircraft to come down. “We don’t know anything regarding the actual cause of why the aircraft came down but the black box has been recovered and a lot of information will be available very quickly.”

“Most of the accidents happen at low altitude either during takeoff or landing. An accident of this sort at this altitude is quite unusual.”

Talking about the aircraft itself the expert said that it has an excellent flight record. The Airbus A320 series and Boeing 737 series are the work horses of aviation.

“In the last eighteen months there have been very high profile accidents which have perhaps made people wonder how safe is it to fly. The reality is that it is still and will remain the safest form of transport that one can possibly imagine.”

Talking about the area over which the aircraft flew the expert said that it was flying over a danger zone. “The area where the aircraft was flying was a dangerous zone, it was stated by the FAA and other authorities that you should not fly in that area below 26,000 feet. This aircraft was above that height.”

“We live in a very uncertain age. There are so many danger zones, so many war zones. It is almost impossible not to fly over some danger zone in that part of the world,” Ross concluded.