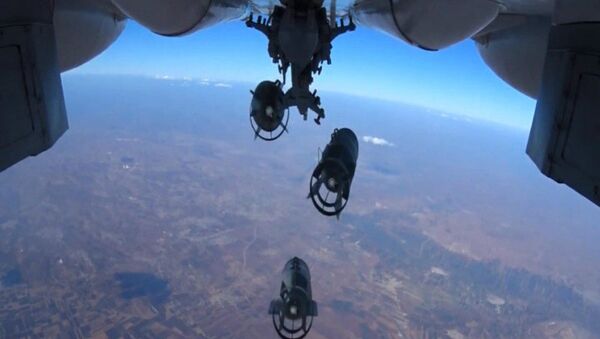 © Russia's Defense Ministry
/
Go to the photo bank
Subscribe
Russian bombers have carried out 131 sorties and destroyed 237 ISIL and Nusra Front targets in Syria's provinces of Hama, Latakia, Homs, Damascus, Aleppo and Raqqa over the past 48 hours, the Russian Defense Ministry said Monday.

The transmission power of the terrorist communication center had been located at a height that allowed terrorists to disrupt the work of the Syrian Armed Forces' radio communications.

"Near the village of Salma in the province of Latakia, a Nusra Front command post with a major communication center was destroyed, which was located at a tactically important height."

A Russian Su-34 bomber destroyed an ISIL camp in the Aleppo province where terrorists trained foreign fighters, the Russian general said. A Su-34 jet also carried out an airstrike on a terrorist plant manufacturing landmines.

"On the outskirts of Aleppo, a Su-34 bomber carried out an airstrike on a [terrorist] camp which was aimed to train militants from foreign countries. The ammunition depot, as well as terrorist infrastructure were destroyed."

"In the province of Hama, a Su-25 attack aircraft launched an airstrike on a terrorist stronghold, where two armored vehicles, as well as two off-road vehicles equipped with anti-aircraft guns were located."

The Russian Aerospace Forces also destroyed an ISIL ammunition depot near Harasta al-Katara in the Damascus province. "As a result of a guided bomb strike on a bunker, where artillery ammunition had been stored, the object was completely destroyed."

#SYRIA Near Harasta al-Katara (#Damascus), #ISIS artillery munitions depot situated in a bunker was destroyed with a guided bomb

000000
Popular comments
I already saw this coming. I mentioned to friends that strikes would be more intensive if terrorism was not ruled out for causing the plain crash of innocent civilians over Sinai.