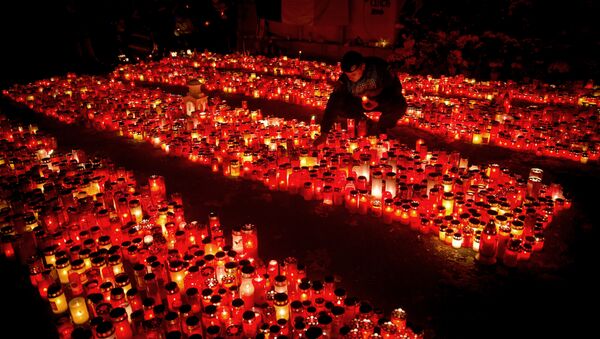 Following the deadly blaze at a Bucharest nightclub early Saturday, three club owners have been arrested on suspicion of manslaughter.

The three men, between the ages of 28 and 36, were questioned by authorities after the incident left 31 people dead and almost 200 injured at Colectiv nightclub, in downtown Bucharest.

At least 90 of those injured remain in serious condition.

Witnesses said the fire began with a fireworks display, set up by a band performing in the venue that night. The blaze led to a stampede, and witnesses described a lack of proper emergency exits which exacerbated the death toll.

According to Raed Arafat, Romania’s State Secretary at the Ministry of Health, the club’s owners did not have the proper permits for holding concerts inside Colectiv, nor for staging pyrotechnics.

Others have also pointed to the possible presence of flammable material used to soundproof the club.

According to Agence France-Presse, one of the suspects taken into custody also partially owns a number of other clubs, two of which have also burned in recent years.

In the wake of the accident, a number of clubs in Romania’s capital have shut down, fearing lax safety standards could put customers at risk.

"I apologize and I take responsibility," Andrei Sosa, owner of Expirat, told the Guardian. He is closing his venue permanently. "From 2003 I have put the lives of thousands of people in danger, weekend after weekend and sometimes during the week."

The La Baza club in the city of Lasi has also apologized for its subpar focus on safety.

"We consider we have been ignorant and irresponsible," the venue’s Facebook page reads. "We were lucky. We don’t want to put anyone’s life in danger."

Other venues are closing down temporarily to ensure that they are up to code.

On Monday, hundreds of mourners gathered outside of Colectiv to place candles and flowers.

"It’s awful that you let your children go in the evening to the club, and you go to look for them at the morgue," Romanian Prime Minister Victor Ponta said on Saturday, according to the Associated Press.

Prosecutors are currently trying to establish who should be held responsible for not acquiring the proper permits.

The Romanian government is covering all medical costs for those being treated.