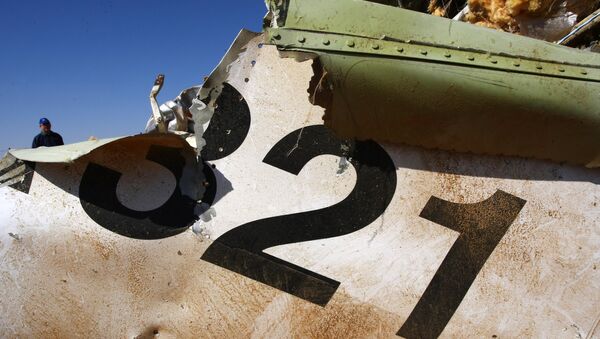 © Sputnik / Maxim Grigoryev
/
Go to the mediabank
Subscribe
International
India
Africa
Kogalymavia confirmed on Monday that a Russian airliner's tail part had been damaged prior to the air crash in Egypt's Sinai Peninsula.

World
Decompression, Structural Faults May Explain A321 Plane Crash
On Saturday, Airbus A-321 operated by Russian airline Kogalymavia crashed in the Sinai Peninsula en route from the Egyptian resort city of Sharm El-Sheikh to St. Petersburg. All 224 people on board, including 25 children, were confirmed dead by Russian and Egyptian authorities.

World
Crashed Russian Airliner Pilot Did Not Seek Traffic Control Help
A passenger plane like the Airbus A321 that crashed over the weekend in the Sinai Peninsula cannot be destroyed in mid-flight because of some technical system failure, the reason for a breakup could only be due to a mechanical impact, the deputy general director of the ill-fated airlines said.

Russia
Terrorism Not Ruled Out as Potential Cause of A321 Crash - Kremlin
However, the crashed Russian airliner had passed all necessary tests when entering the Kogalymavia fleet; and the technical condition of the plane was good, the company's top manager said Monday. The aircraft's engines were inspected in Moscow on October 26; no problems were found. Moreover, there were no problems with the quality of fuel used by the Russian airliner.