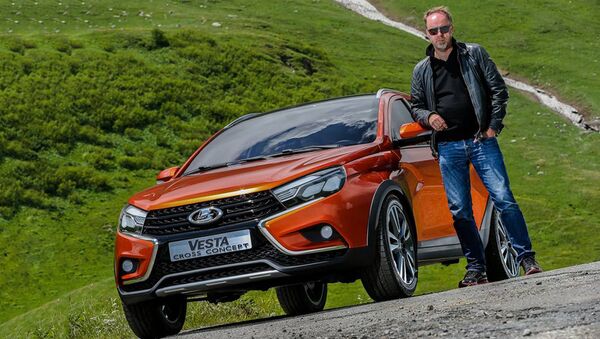 In an interview for Gazeta.ru, AvtoVAZ Lada chief designer Steve Mattin offered his take on life in Russia, including his impressions on the contrast between big city life in Moscow and Tolyatti, the Volga River city AvtoVAZ calls home. Most importantly, he filled us in on his hopes for his team's baby: the new Lada Vesta.

For four years now, Mattin has lived and worked in Russia, splitting his time between Tolyatti, AvtoVAZ's home, and Moscow, where the company has a second design office.

Commenting on life here, Mattin explained that "Russia is a vast country, and the longer I live here, the more experience I get. Every day brings something new."

Asked about the contrasts between Tolyatti and Moscow, Mattin noted that "in Moscow, the rhythm of life is much faster –everything happens very quickly and changes rapidly. At the same time the city is oriented toward culture. There are other differences, from the fashion to the cars, to the architecture and interiors –restaurants, culture, people and their behavior –all of this is very dissimilar. The Moscow office allows me to take it all in, to get a better understanding of the Russian people and the history of the city and its creative atmosphere." 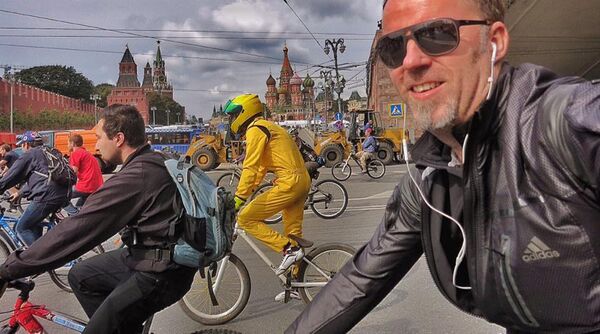 Mattin in a biking event in Moscow; the Kremlin in the background.
© Photo : AvtoVAZ

The automotive designer noted that he loves going on long walks in the city center, studying how it lives and breathes. "I always have a camera with me, and with its help I'm painting the whole picture of my life in Russia. I absorb everything that surrounds me, and look for inspiration."

"I also love going to various cultural events," Mattin notes. "For example, I go to the opera and to the ballet, something I never used to do before! But here everything is just a step away and very easy to do."

Mattin also loves visiting exhibitions of various kinds. "It gives me a chance to unwind from a difficult day at work, to reset my brain. After all, designers are the kind of people who always need to search for inspiration. For example, one can look at the color of autumn leaves and to decide that this could be a new color for a car. Landscapes, views – it's all part of it. For example, some of the details of the Vesta's interior were inspired by the cracking of ice in water reservoirs. The same can be said about the ballet or the opera. The atmosphere, people's expressions –all of this takes form and becomes paint for my canvas. So it can be said that there is a strong connection between my work and my life outside of work. Maybe it is not very noticeable, but it's important nonetheless."

Asked whether his impressions on Russia have changed over the time he has lived here Mattin noted that "yes, in this time, a lot has really changed. This was especially noticeable in Moscow. When I first came here four years ago, traffic in the city was just awful! There was no regulation of parking spaces. Everyone just double parked all over the place. It was complete chaos. Now, with all these parking restrictions in the capital, the city has become much friendlier toward pedestrians. It has become easier to move about, easier to find a parking space. The city has changed dramatically – it now has more pedestrians and less traffic jams."

As for his preferred method of getting about in the capital, Mattin noted that prefers the metro. "It's convenient and much faster, especially if there are traffic jams. Of course, I haven't really been in the metro during the rush hours –it's probably not always so comfortable then. But if the place I'm going to is far away and I'm not in a car, I have no problem in hopping on public transport. Moreover, Moscow's metro is really the most beautiful I have ever seen. Each station has its own face –its own character, rooted in the past."

An Industrial City in the Thicket

Asked about his first impressions with Tolyatti, the industrial city city along the Volga River, Mattin noted that he never felt that he had somehow found himself in the wrong place.

Living in an apartment complex provided by AvtoVaz close to the Volga River and to the natural environment, Mattin noted that his Tolyatti life has its own pluses and minuses. "On the one hand, it's very good –an opportunity to be closer to nature. That is, this is an industrial city in the thicket. On the other hand, it is different from what I've become used to. There are no objects of culture, the building in which I live is very old. Everything was built during the construction of the plant itself [finished in 1970]."

"But in this business," the designer explained, "you do not choose your surroundings. You choose your vocation. And you accept that it is necessary to make compromises. When you go abroad, you leave your family and friends. But in exchange, you receive an incredible life experience."

Pursuing an active lifestyle outside work, Mattin is has incorporated many experiences, including auto racing, a passion of his since childhood, into his life in Russia. "For the second time in a row now I went to watch the Formula 1 race in Sochi. I myself participate in races at the Lada Racing circuit, which takes place in Sosnovka, Tolyatti." 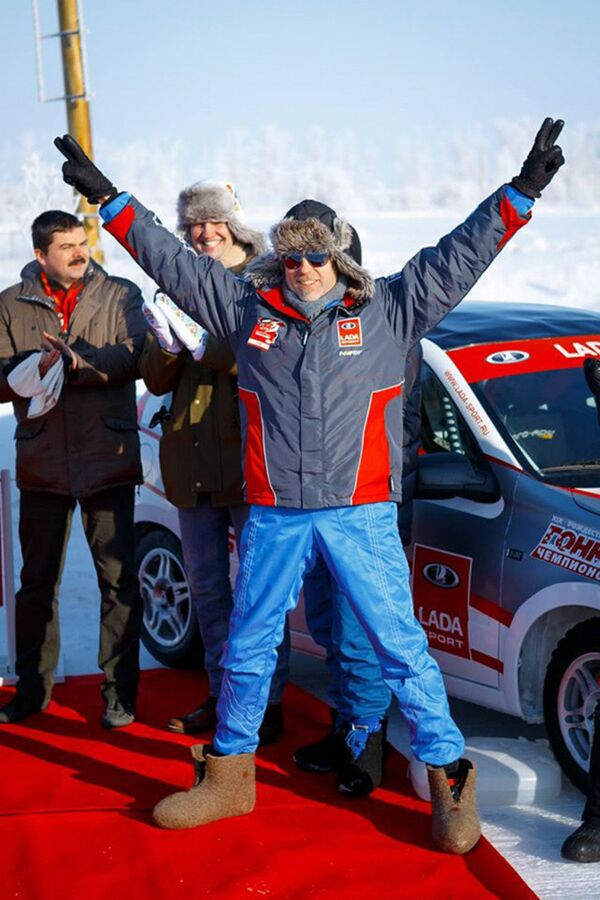 Commenting on his adventures, Mattin recalled that a couple years ago, he joined a friend of his who had recently gotten married on a two day trip using small boats along the Volga. "I don't know, maybe this is an ordinary way for Russians to celebrate their weddings, but for me it was something out of the ordinary, and I enjoyed it very much!" 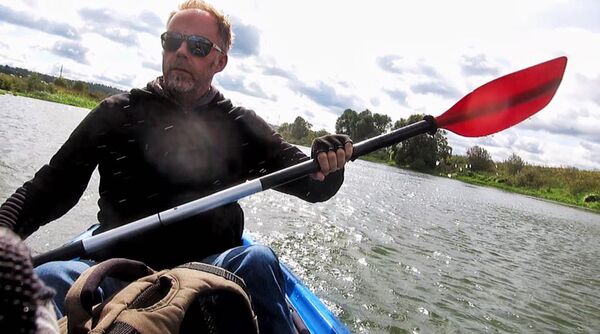 His interviewer asked Mattin about a photo of him on his Facebook page where he's shown skydiving. "Yeah, that was a completely crazy experience. Most people have never done something like this in their life. In Russia I got the chance to try it. It was a very strange experience to find myself in an old airplane, bound tightly to a person who I didn't even know, and then jumping out of an airplane with him! After the jump, you have about a minute freefalling. You fall, looking down at the earth, four kilometers below, and just take in the moment. It's frightening, but is an important life experience –a lot of adrenaline! It's not something you'll ever forget. If you get the opportunity, I highly recommend it." 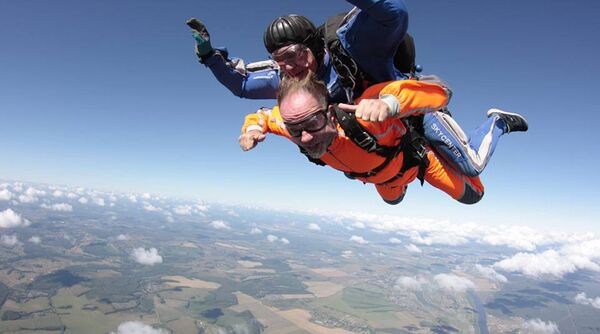 Mattin jumping out of an airplane with a total stranger.
© Photo : AvtoVAZ

Asked about how he's able to stay in touch with friends and loved ones back home, Mattin admits that "this is probably the most difficult part of my life in Russia. You can't just spontaneously meet with someone. Everything must be planned ahead of time, to wait for long holidays or to add vacation days to your weekends. And it's not so easy to just up and come to Russia. It's necessary to get a visa, to plan out your trip. Of course, we have Facebook and Skype. But of course I miss family and friends. Happily, I also have many friends in the business. We run into one another regularly at various events, such as car dealerships. And when I go visit family in the UK, I try to meet with as many of my friends there as possible."

Mattin recalled that everyone back home has "very different perceptions of Russia. Everyone's interested in finding out about ordinary things: about how people live, what they do on the weekends, differences between Western countries or countries in the East. But I have friends in Japan, in the US, in Australia, in Europe, and every culture has its own peculiarities."

The Vesta, Mattin's Pride and Joy

The Lada Vesta sedan, designed by Mattin and his team, recently came to life, going into series production last month and going on sale across the country in the near future.

Asked to comment on the triumph, Mattin noted that "when you see that the project you've been working on for so long come to life, you do feel very proud. This is the reason we're in this profession. For the designer, it's important to see how his sketch becomes reality, and the car appears in the city streets. Right now the car is going on sale, and it's a very emotional and heart-pounding moment not just for me, but for the entire team. It was a real challenge, but it's why we're here: to accept the challenge and to work to change the brand. I believe in what I'm doing, and this work is no less important to me than what I did at Volvo or Mercedes-Benz."

Presidential Test-Drive: Putin Takes to the Wheel of Brand New Lada
Asked whether he would be getting his own Vesta, Mattin noted that he "cannot wait to get it. Of course, all this will depend on the company management. I will mainly drive it in Tolyatti – in Moscow I have practically no need for a car. But right now I don't even know what color it will be."

Commenting on President Putin's recent test drive of the Vesta, Mattin noted that it "was a very good PR move, and we really appreciate his support. He had driven our cars before, but that was the Kalina. But now we have a completely new car, and I sincerely hope that he liked it."