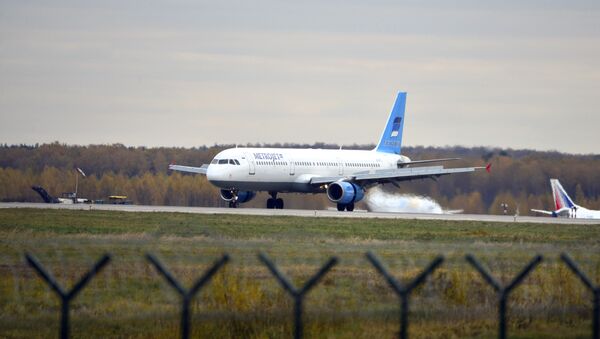 The bodies of about 100 passengers were found among the wreckage of the Russian airliner which crashed in Egypt's Sinai peninsula Saturday, an Egyptian security official at the scene told Reuters.

Bodies of all children have been recovered, he added. Seventeen children, aged 2 to 17, were on board. Officials say that there were no survivors.

Sharm el-Sheikh Airport authorities said that all of the people aboard the aircraft were Russian.

A Metrojet/Kogalymavia A321 en route from the Red Sea resort of Sharm el-Sheikh to St Petersburg, Russia's second largest city, crashed Saturday near el-Arish in the north of Sinai, officials said.

The plane went down in a mountainous area in central Sinai and poor weather conditions have made it difficult for rescue crews to get to the scene, the officer said. Other sources, however, suggest the weather conditions in the vicinity of the crash site were relatively benign.

A source in Russia's Federal Air Transport Agency (Rosaviatsia) told RIA Novosti the Kogalymavia Flight 9268 carrying 217 passengers and 7 crew took off from Sharm El-Sheikh at 3:31 GMT and went off radar after 23 minutes of flight. Most of the passengers are said to be Russian tourists, including 17 children.

The Russian A321 pilot informed air-traffic controller of technical faults after take-off and asked for route change, a source in the Sharm el-Sheikh airport told RIA Novosti.

Aviation expert on MSNBC saying A321 has history of moving rudder/tail without pilot input. #7K9268 - @AimanJarrar

MENA news agency reported that Egyptian Prime Minister Sherif Ismail canceled all his scheduled visits on Saturday following the aircrash. A statement from the prime minister's office said Ismail had formed a cabinet level crisis committee to deal with the crash.

We are aware of the media reports.Efforts are now going towards assessing the situation. We'll provide more information as soon as available

There were no indications that the Russian Airbus was shot down, Egyptian security sources said. Egypt's North Sinai is home to a two-year-old Islamist insurgency and militants affiliated to Islamic State have killed hundreds of soldiers and police.

A team of Russian investigators is already en route to Egypt to determine whether any negligence or failures to observe proper procedures took place before takeoff, according to the Emergencies Ministry.

Five of the ministry aircraft - three Il-76, Be-200 and An-148 - are about to depart to Egypt to deal with the aftermath of the crash, according to a ministry official.

Russian President Vladimir Putin has issued a statement expressing his condolences to the families of the victims, and has declared November 1 a national day of mourning.