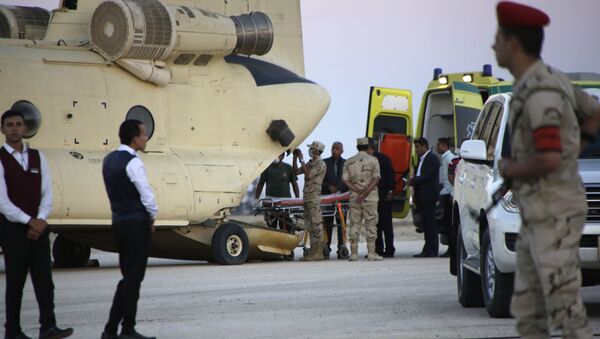 Russian Prime Minister Dmitry Medvedev ordered to set up a government commission to assist the victims and families of those who died in the Airbus-321 crash in the Sinai Peninsula in Egypt, a document published on the Russian cabinet website on Saturday stated.

MOSCOW (Sputnik) – All 217 passengers and seven crew members of the airliner en route to St. Petersburg from the resort city of Sharm El-Sheikh were confirmed dead by both Russian and Egyptian authorities.

According to the Russia

"To form a government commission to assist the victims and families of those killed in the Kogalymavia A-321-231 (registration number EI-ETJ) crash on October 31, 2015, on the territory of the Arab Republic of Egypt," the document stated.

A commission is headed by the Transport Minister Maxim Sokolov. Federal Air Transport Agency Chief Alexander Neradko will be the deputy head of the commission.

In total, the commission consists of 12 people.

The Sinai aircrash became the deadliest air accident in the history of Russian aviation, surpassing the 1985 disaster in Uzbekistan, where 200 peoplpe died.

Russia and Egypt keep on coordinating efforts to manage the #A321 crash. Investigation will be held thoroughly.

The airliner en route from Sharm el-Sheikh to St Petersburg went off radar at 3:21 AM GMT 23 minutes after take-off.

Search operations are continuing for the remaining 95 bodies of the Airbus-A321 flight 9268 that crashed en route from Sharm El-Sheikh to St. Petersburg.