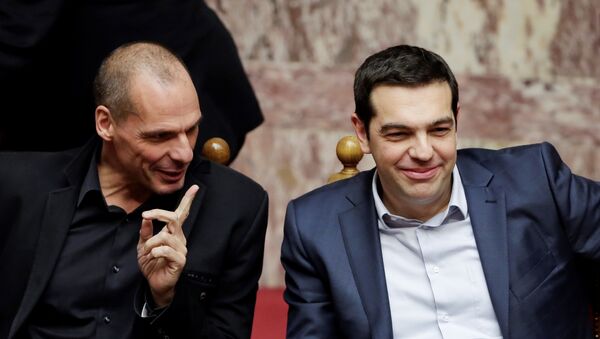 Former Greek finance minister Yanis Varoufakis has said the Greek Prime Minister Alexis Tsipras "will not succeed" in his bid to turn the country's finances round and that its creditors are implementing a program which they know cannot be implemented.

Tspiras came to power in January 2015 on an anti-austerity pledge, promising to lift some of the harsh conditions imposed on the country by its creditors, the European Central Bank (ECB), the International Monetary Fund (IMF) and the other Eurozone states — known as the Troika — following the sovereign debt crisis.

Having attempted renegotiations, Tsipras put the conditions to a referendum at which the Greeks rejected the harsh conditions proposed by the Troika. However, under huge pressure to recapitalize the Greek banks and faced with an ultimatum, Tsipras performed a U-turn and accepted the proposals, causing a split in his party. Varoufakis immediately stepped down as finance minister in disagreement with Tsipras.

Varoufakis — who studied economics, taught the subject in the UK and Australia, and is Professor of Economic Theory at the University of Athens — said whatever austerity measures were being inflicted on the Greek people, the bailout conditions were unsustainable.

"Tsipras is not going to succeed, and he knows that. I resigned because I was not prepared to sign up to a reform program that was impossible to implement."

"Tsipras clearly stated that he was forced to accept this program, although he did not believe it could be implemented," he said.

"We now have this ludicrous situation where the powers that be in Europe — including the International Monetary Fund, the European Central Bank, the German and the Greek governments — are all pretending to be implementing a program which they know cannot be implemented. I refused to be part of these shenanigans, and that is why I resigned.

"In the last five years, we effectively had three governments which all tried to implement a program that is impossible to implement. Now that my former colleagues and comrades are following the illogical logic of the past five years, the result will be the same."