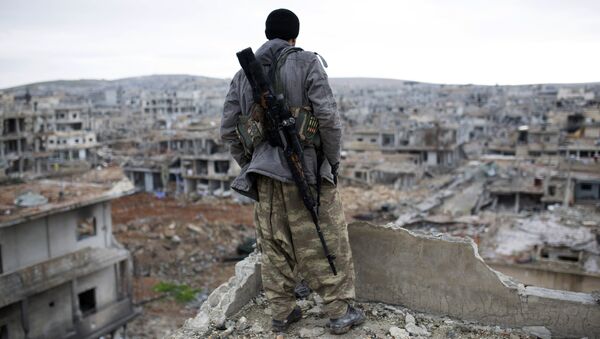 © AP Photo
Subscribe
Turkish President Tayyip Erdogan Turkey pledged "to do what is necessary" to stop Kurds from declaring autonomy in the border town of Tel Abyad.

Canada Likely to Make Up for Anti-ISIL Fight Pullout by Training Kurds
Turkey is poised "to do what is necessary" in order to prevent Kurds from declaring autonomy in the Syrian town of Tel Abyad, located near the Turkish border, the country's President Tayyip Erdogan was quoted by media reports as saying.

Advances made by autonomy-seeking Syrian Kurds, led by the Democratic Union Party (PYD), have irritated Ankara, which sees their plans as a threat to Turkey's national security and says it could stoke separatism among Turkish Kurds.

Erdogan's approach to the Kurds is a disaster for Syria, Turkey, and, of course, the Kurds. https://t.co/yoAwbfY1r9

In light of its failure to find partners in Syria to fight ISIL, Al Nusra and other terrorist organizations, the US has sought to work together with the YPG.  Retired General John Allen testified before Washington's Senate Foreign Relations Committee on US Mideast strategy, where he said the US was in a "very delicate, diplomatic process" in trying to work with Turkey and the YPG at the same time. Turkey's Kurdistan Workers Party (PKK), which is affiliated with the PYD, remains designated as a terrorist group by the US State Department.

However, Erdogan blamed the PYD for conducting "ethnic cleansing" in the area, saying that Western support for the Syrian Kurdish militias is tantamount to backing terrorism.

"The PYD is committing ethnic cleansing here [of] Arabs and Turkmen. If the Kurds withdraw and don't form a canton, there's no problem. But if the mindset continues, then what is necessary will be done or we face serious problems," Erdogan said.

He also said that Turkey is "determined to fight anything that threatens us along the Syrian border, inside or out."

His remarks came as Turkey launched a two-front military campaign against the Islamic State group in Syria and the Kurdistan Workers' Party (PKK) in northern Iraq.

New US Defense Spending Bill Would Authorize Directly Arming Kurds in Iraq
The Turkish military campaign against the Islamic State and PKK positions takes place amid a surge in violence after a suicide bombing in the Turkish border town of Suruc killed 32 people, most of them Kurds, and injured over 100, and the murder of two police officers in the southern city of Ceylanpinar.

The Suruc suicide bomber was reportedly affiliated with ISIL. The PKK claimed responsibility for the Ceylanpinar killings, saying that the policemen had backed the Islamic State group.