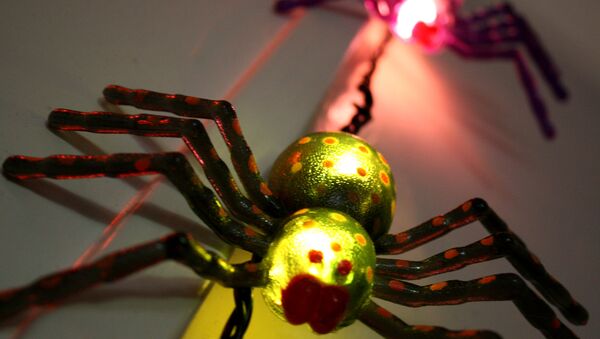 © Flickr / Lindsey Turner
Subscribe
A Logan County, West Virginia, assistant prosecuting attorney was suspended on Wednesday after pulling a gun on fake spiders that office staff had put up to decorate for Halloween.

Carving a Halloween Pumpkin With a Rifle
Assistant Prosecutor Chris White suffers from severe arachnophobia and apparently was infuriated over the plastic decor, so he pulled out his gun and threatened to shoot them.

Logan County Prosecutor John Bennett claims there was no clip in the weapon, but that the staff had no way of knowing that.

“He said they had spiders everyplace and he said he told them it wasn’t funny, and he couldn’t stand them, and he did indeed get a gun out. It had no clip in it, of course they wouldn’t know that, I wouldn’t either if I looked at it, to tell you the truth,” Bennett told WCHS.

Bennett has stated that White did not point the gun at any of the three secretaries who were present, but did threaten to shoot all of the spiders.

100 Years of Halloween Costumes in Only Three Minutes

"Quite naturally, the ladies were concerned, as I would have been. Anybody would be, I would think, with a gun no matter where it was," Bennett said.

Following the incident, Bennett sent out a memo banning firearms in the office aside from the one carried by their investigator. He has stated that he does not intend to fire him at this time.

The incident was caught on surveillance footage and the Logan County Chief Deputy M.A. Mays has opened a criminal investigation.

Mays told WCHS that he does not anticipate filing any charges, however.