IMF Mulls Reforms to Allow Lending to States in Default 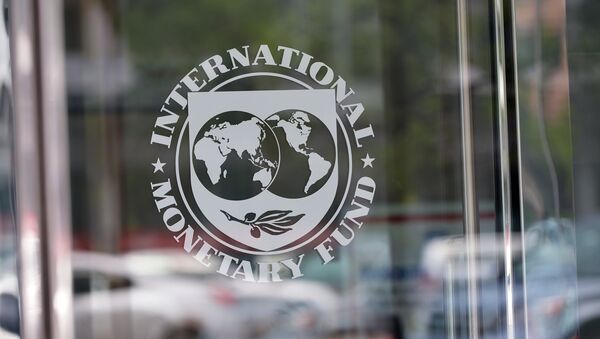 International Monetary Fund (IMF) Communications Director Gerry Rice said that the IMF will discuss reforms that would allow the Fund to lend in the presence of arrears to official bilateral creditors.

IMF May Continue Funding Ukraine if It Refuses Russia Repayment
WASHINGTON (Sputnik) — The International Monetary Fund (IMF) seeks to reform its lending policies in order to allow countries to borrow money even if they default on their obligations to bilateral creditors, IMF Communications Director Gerry Rice said in a briefing on Thursday.

The reform is a part of a broader program related to reforming IMF’s lending framework that governs sovereign debt restructuring.

"That program of work has been phased over the last several years," Rice explained. "It includes discussion of reforms that would allow the Fund to lend in the presence of arrears to official bilateral creditors in carefully circumscribed circumstances."

Earlier on Thursday, US media reported the IMF could reform its lending policies in order to proceed with a bailout program for Ukraine even if the country potentially defaults on its debt to Russia.

IMF May Include Chinese Yuan as International Reserve Currency in November
The IMF's current sovereign-arrears policy is putting the four-year $17.5-billion assistance package to Ukraine, approved by the IMF in March, in jeopardy.

Russia, which purchased $3 billion in Eurobonds from Kiev in December 2013, maintains that Ukraine must repay its debt in full by the end of 2015.

The IMF could reconsider its lending-into-arrears policy in late November, according to media reports.