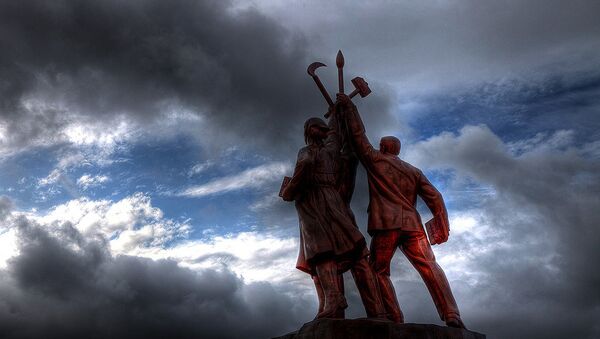 According to UN special rapporteur on human rights in North Korea, as many as 50,000 North Korean nationals sent overseas have been working in conditions that can be best described as "forced labor".

UN Sets Up Office in Seoul to Focus on Human Rights in North Korea
MOSCOW (Sputnik) – As many as 50,000 North Korean nationals sent overseas have been working in conditions that can be best described as "forced labor," the UN special rapporteur on human rights in North Korea stated.

"DPRK nationals have been sent to work in many parts of the world, laboring under conditions that amount to a subjection to forced labor, both by their own and host governments," Marzuki Darusman told reporters on Wednesday while presenting his recent report on the human rights situation in North Korea.

The report, dated September 8, cites data on the issue obtained from non-governmental organizations and North Koreans fleeing the country.

"According to various studies, it is estimated that more than 50,000 workers from the Democratic People’s Republic of Korea operate abroad. The vast majority are currently employed in China and the Russian Federation," the report reads.

The research claimed that North Korean citizens abroad earned on average between $120 and $150 per month, while employers paid significantly higher amounts to the North Korean government.

"Workers are forced to work sometimes up to 20 hours per day, with only one or two rest days per month. In some instances, if they do not fulfill the monthly quota imposed, they reportedly do not get paid," it added.

Among other dire working conditions those people are encountering are inadequate health and safety measures, restriction to freedom of movement and assignment of the most dangerous and tedious tasks, according to the report.

North Korea has been the subject of criticism for alleged human rights abuses from numerous governmental and non-governmental organizations for many decades now.

Pyongyang has repeatedly rejected the claims, saying they are fabricated.