US Coalition Conducts Fewer Airstrikes in Syria Since Russia's Involvement 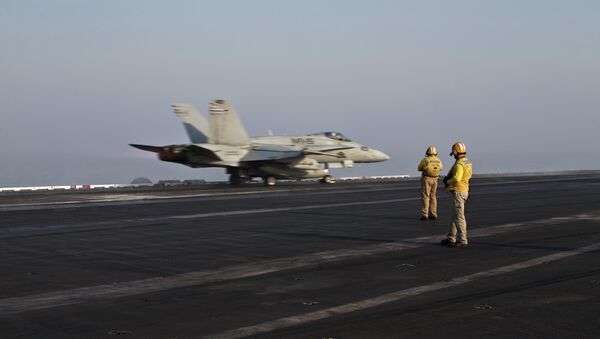 The US-led coalition scaled back its airstrike campaign in Syria since Russia launched a multinational counterterrorism operation aimed at defeating extremists in the war-torn country.

"US strikes on Islamic State militants in Syria averaged about seven per day in August, a pace similar to the entire first year of the air campaign that began last year," Defense News reported, citing Pentagon data.

In September, this figure fell to slightly more than four strikes daily.

"And from October 1 through October 26, as the Russians began airstrikes on targets in Syria supporting embattled President Bashar al-Assad, the daily average of airstrikes fell to below four per day, the data shows," the media outlet added.

Boots on the Ground: Pentagon to Launch 'Direct Action' in Syria and Iraq
To put this into perspective: since the beginning of the aerial campaign, Russian forces have carried out some 830 strikes against ISIL targets, killing several hundred militants, as well as destroying dozens of command centers and weapons depots.

US military officials maintain that the Russian-led aerial campaign and the drop in number of daily US airstrikes are not related.

"To be clear, we are not cooperating with Russia, and we are not letting Russia impact the pace or scope of our campaign against ISIL in Iraq and Syria," Defense Secretary Ashton Carter told the US Senate Armed Services Committee on Tuesday.