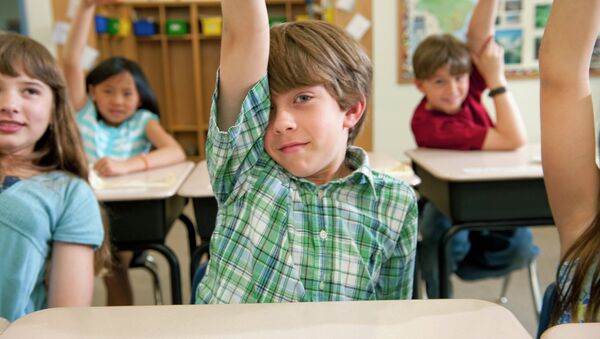 © East News
Subscribe
Schoolkids are falling behind in math and reading test scores all across the US, according to a report from the National Assessment of Educational Progress (NAEP) exam released on Wednesday.

Obama Announces New US Education Secretary to Replace Arne Duncan
Students in fourth and eighth grades  performed worse than the previous year on the standardized math test for the first time in the last twenty five years. Reading scores were down for these age groups as well: fourth grade scores were flat, while there was an observable decline in scores for eighth graders.

Students in Washington, DC and Mississippi showed substantial improvement in both subjects, according to the Associated Press, and represented small bright spots in an otherwise dismal report.

US Secretary of Education Arne Duncan was quick to reassure parents and teachers, and defend the Common Core Standards Initiative, which he was instrumental in pressuring US states to adopt in 2009-10. Duncan and other Common Core supporters insist the program holds students to higher academic standards, while critics insist many states had better standards before.

"We should expect scores in this period to bounce around some, and I think that 'implementation dip' is part of what we're seeing here," Duncan told journalists. "I would caution everyone to be careful about drawing conclusions."

"One year does not make a trend," Minnich said at a panel discussion Wednesday. "We set this new goal for the country of college and career readiness for all kids. Clearly, these results today show we're not quite there yet and we have some work to do."

Touted as critical thinking-oriented with little emphasis on memorization, Common Core spells out the desired level of English language arts and math proficiency every student should have at each grade. But the standards have been criticized, including by many US teachers, as federal overreach and for their emphasis on standardized testing and the demand that teachers "teach to the test."  Many parents have also been left perplexed by the initiative's teaching models.

How the states really did on the math and reading tests. You must acount for demographics. https://t.co/iTcuPaSezr pic.twitter.com/KLJnARJmPX

The NAEP tests, known as the "nation's report card," don't align entirely with Common Core, but NAEP representatives say there's "quite a bit" of overlap between the tests and the CC standards.

While the results report showed no marked change in the achievement gap in reading between white and black students in the US, math scores showed some hope: there was a small narrowing in the gap between black fourth-graders and their white peers.  White students scored, on average, 24 points higher than their black counterparts, marking a two-point narrowing since 2013, but reflecting the persistent need for the US education system to do more to serve students of all skin colors.