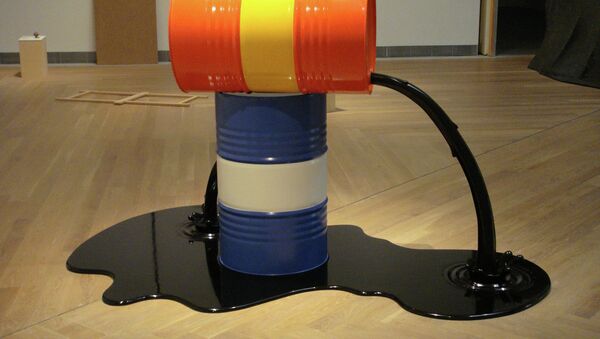 A nearly 5% slump stemming from negative dynamics in the fund’s stock market investments is stirring  concern, and the fund’s market value is bound to further decrease as the Norwegian government is planning cash withdrawals for the first time ever to make up for the budget deficit.

Norges Bank Investment Management is a $860 bln oil-based wealth fund, a subsidiary of the Norwegian central bank and is also one of the world’s major institutionalized investors, having massive holdings in stocks and other financial assets. The fund reported a 4.9% quarterly loss ($32 bln) in its total value as the negative dynamics in the emerging markets hit its equity assets, while the prolonged decline in oil prices and the Volkswagen emissions scandal also affected the fund’s capitalization.

Gulf States to Run 'Out of Cash' in Five Years if Oil Prices Remain Same
The fund’s chief executive also said in the fourth quarter this year the Norwegian government would commence cash withdrawals from the fund rather than deposit cash up for investment as the low oil prices significantly impaired Oslo’s fiscal performance.

According to the fund’s reports, its worst performing investment assets were a selection of Chinese stocks, Volkswagen, Glencore and Daimler. Stock market investments make up about 59.7% the fund’s value, and these assets alone dropped 8.6% in Q3. Meanwhile, the fund’s investments in debt securities performed better, adding 0.9%.

NBIM has recently been increasing its real estate portfolio, which returned some 3% during the period.

During the July-to-September period, the MSCI’s Emerging Markets Index dropped some 19%, while the NBIM’s losses exceeded 21% on the Chinese stocks, and some 16.6% on a broader selection of emerging markets equity assets, meaning the quality of the fund’s wealth management is rather high.

Since the early 2000s, the NBIM’s value increased sixfold due to the boom in oil prices, however, the constant inflow of oil revenues from the Norwegian budget is just about to discontinue as Oslo finds itself short of cash. The government is planning to withdraw some $440 mln from the fund in 2016.

Hardly a significant sum compared to the fund’s total value, yet the change of money flow direction means NBIM will have to be more market-efficient in terms of investment allocation.

Meanwhile, the fund’s returns from emerging markets are shrinking because of the ‘war of currency devaluations’ raging in most developing nations struggling for competitiveness. Therefore, the fund will concentrate on investments promising higher returns, meaning it might reduce its presence in Europe in favour of the better-performing emerging markets, as noted by the fund’s chief executive.

As Crude Imports Rise Again, US Plans to Sell Off Strategic Oil Reserves
The statement seems contradictory, as the recent fund’s financial losses are stemming from its excessive exposure to the emerging markets in the first place, making further investment in similar quality assets hazardous.

According to NBIM charter documents, the fund must invest 60% its money in stocks, 35% in bonds, and 5% in real estate. At the end of Q3 the correlation was 59.7% to 37.3% to 3%, suggesting, coupled with the executive’s commentary, the emerging markets’ real estate sector might expect a soon inflow of the Norwegian money.

In the recent months, the fund was pressured to disinvest from energy stocks, and at the moment it is actively selling coal miners equities.