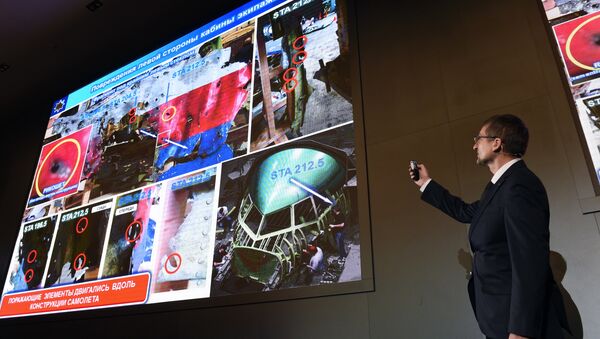 In October 2015 the Dutch Safety Board (DSB) released its final report on the MH17 catastrophe in eastern Ukraine on July 17, 2014; according to DSB Chairman Tibbe Joustra the Malaysian airplane had been brought down by a BUK missile with a 9NC14N warhead.

However, the report left more questions than answers.

"Considering that the DSB's task was not to identify a perpetrator but to conduct an investigation that clarified the probable cause so as to prevent similar tragedies, the DSB's report revealed that stunning neglect was a major contributing factor to the crash that claimed the lives of all 298 souls on board," independent political consultant on conflict and conflict resolution, founder of Nsnbc.me Dr. Christof Lehmann underscores in his article for New Eastern Outlook.

US Hiding Crucial Intel on MH17 Downing – Media
"On the day of the crash a total of 160 flights had operated above the area until the airspace was closed after the crash… In the opinion of the Dutch Safety Board there was sufficient reason to close the airspace above eastern Ukraine as a precaution. The Ukrainian authorities failed to do so," Tibbe Joustra emphasized as cited by the political consultant.

However the details of the tragedy are still shrouded in secrecy: no party, involved in the investigation, has not yet released "independently testable evidence" such as certified radar data, certified copies of air traffic control — flight crew recordings, certified data from the flight data recorder, the cockpit voice recorder, and so forth.

In light of this, some experts have started to speculate about an alleged "secret agreement" between Western countries, Australia and Malaysia, he noted.

"Points of contention are that Almaz-Antey means that its full scale experiment has pinpointed the location of the missile launch more accurately, and that the missile was not launched from an area that at that time was held by the rebelling forces in eastern Ukraine," Dr. Lehmann emphasized.

'Partially Blind' Europe, 'Greedy' Kiev Responsible for MH17 Tragedy
Since the DSB investigation was not aimed at finding out who was the real culprit, there still remains room for justified speculation and painful questions, the political consultant remarked.

For instance, he wrote that some experts hint at the fact that the Malaysian airliner was "downed in an 'Operation Northwood' style false-flag attack."

"Operation Northwood" was an operation proposed by the Department of Defense (DoD) and the Joint Chiefs of Staff (JCS) in the 1960s and aimed against the Cuban government. The authors of the plan offered to commit acts of terrorism against American civilians and military targets in order to then shift the blame to the Cuban government.

"Having a NATO country lead the investigation added credibility to such suspicions… Considering the geopolitical chess games related to the crash, why was the investigation not led by Malaysia or a third and neutral country?" Dr. Lehmann asked.

The independent political consultant insists that there is an urgent need for full transparency regarding the catastrophe: full and undistorted data on the incident could have dispelled the doubts and crazy speculations.

"In the light of all of the involved governments' and parties' lack of transparency and ethical integrity one has to encourage those who have access to data to do what is right — even though it brings them into conflict with the law," Dr. Lehmann remarked.

000000
Popular comments
We also need to see the full details of the projectile laser analysis showing the angle of penetration. Where is the top of the plane? The earlier report had indicated that the fuselage was penetrated from the roof of the cockpit We would also like the tapes and video of the Pilots autopsies made public. Who undertook the autopsy and was it independently supervised and witnessed? Why were relatives prohibited from undertaking an independent analysis and autopsy. Strange how Ukraine claims their radar was switch off at the time, yet Russian radar monitors had reported a number of radar installations were active in the region at the time of the incident, Did they interview the Air Traffic Controllers? They should make the full cockpit, ATC controller and black box recordings available? The other outstanding issue is the reported Ukrainian Air force activity on the day. A number of independent witnesses have given evidence that they saw Ukrainian jets trailing MH17.