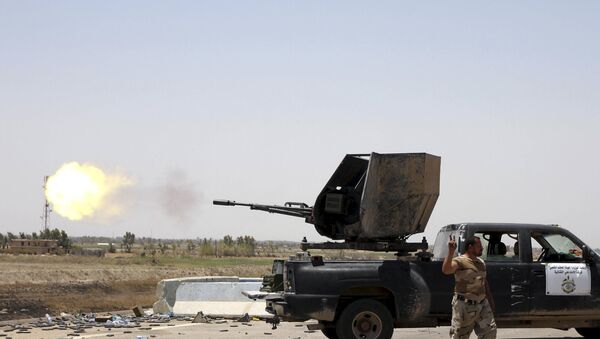 Russian-led counterterrorism efforts are so successful that they are "unnerving" Washington, CCTV reported. As a result, last week US leadership decided to act so as to prevent Iraq from fostering ties with Moscow.

The Chinese media outlet believes that the operation to free hostages in Northern Iraq followed this new logic. Last Thursday, US and Kurdish forces managed to free 70 people from a prison located to the west of Kirkuk. The operation saw the United States lose its first soldier in combat since Obama launched the campaign to degrade and ultimately destroy Islamic State.

Baghdad Allows Russia to Bomb ISIL Terrorists Running From Syria Into Iraq
This mission raised questions over Washington's plans in Iraq. On Friday, US Defense Secretary Ashton Carter tried to dispel fears of the possible  mission creep by saying that the US was not "assuming a combat role" and the operation was "a continuation of our advise-and-assist mission."

However, Carter stated that similar missions, which redefine assistance if not blur the line between combat and training, could be conducted in the future.

The operation took place on the same day as Vladimir Putin's approval rating hit a new high reaching 89.9 percent. The Russian leader is increasingly popular at home due to his efforts to help solve the Syrian crisis, the Russian Public Opinion Research Center (VTsIOM) explained.

However, Putin's campaign, which has both diplomatic and military components, does not go unnoticed outside of Russia and especially in the Middle East.

CCTV believes that the US-led hostage rescue operation was a show of force aimed at Iraq's leadership. The mission was meant to send a clear message to Baghdad, which is rumored to be planning to ask Moscow for greater assistance in its fight against Islamic State.

World Would be Much Better if Hussein, Gaddafi Were Still in Power - Trump
Iraq's concerns are reasonable. After more than 12 months of US-led airstrikes ISIL still controls large parts of Northern Iraq, including the second largest city in the country, Mosul.

Meanwhile, extremists are reported to be fleeing from key areas in Syria largely due to the Russian-led aerial campaign, which was launched less than a month ago.

The United States, according to the media outlet, will not let Iraq leave the fold.