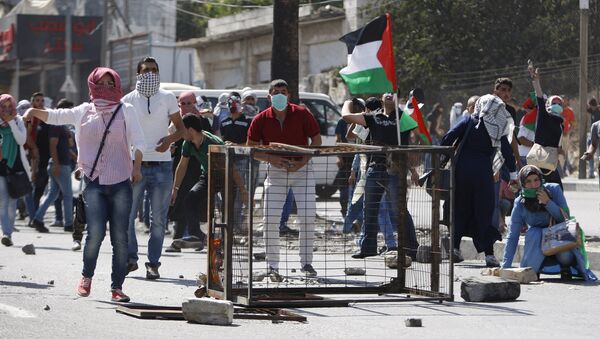 A new wave of violent clashes broke out between Palestinians and Israeli soldiers in the West Bank after the funeral of Eyad Jaradat (19), killed during clashes in Hebron.

Dozens of Palestinians protested Tuesday across the West Bank district of Hebron after the funeral of 19-year-old Eyad Jaradat, who was shot dead during the clashes between Palestinians and Israeli security forces on October 27.

The protest has turned into the violent clashes. Israeli soldiers used a tear gas and flash bang grenades to disperse protesters.

Clashes between Palestinians and Israeli security forces at East Jerusalem’s Temple Mount holy site in September led to a new wave of violence in the decades-long regional conflict.

Israel Arrests 22 Palestinians, Including Three Hamas Members in West Bank
Palestinians seek the diplomatic recognition of their independent state, proclaimed in 1988 on the territories of West Bank, including East Jerusalem, and the Gaza Strip.

The Palestinian Hamas movement, classified as a terrorist organization by a number of countries including Israel, the United States, Egypt and EU member states, demands that Israel withdraw from territories it seized during the 1967 Six-Day War, which Palestinians claim as their homeland.

The decades-long Israeli-Palestinian conflict has been recently aggravated by skirmishes between Palestinian and Israeli security forces at East Jerusalem’s Temple Mount holy site in September.

On September 20, Israeli authorities detained Hasan Yusef, the leader of Hamas in the West Bank, having accused him of provoking a current wave of terror.