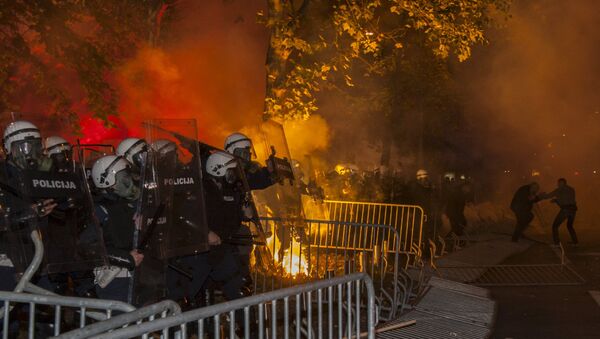 Allegations by Montenegrin Prime Minister Milo Djukanovic of Moscow's involvement in provoking unrest in the country are unfounded, the Russian Foreign Ministry said in a statement Tuesday.

MOSCOW (Sputnik) — Djukanovic claimed in an interview last week that Russia allegedly played an active role in organizing anti-government protests in his country.

"Djukanovic did not provide any concrete facts of alleged Russian involvement in the inflation of social tensions in Montenegro and could not provide them, because these facts do not exist," the statement read.

Montenegro Seeks to Shift Focus Accusing Russia of Fueling Civil Protests
A string of anti-government protests, organized by the Democratic Front opposition coalition, has shaken the small Balkan country over the past weeks. The latest gathering on Saturday saw police use tear gas on demonstrators, who called for Djukanovic’s resignation and demanded Montenegro stay out of NATO.