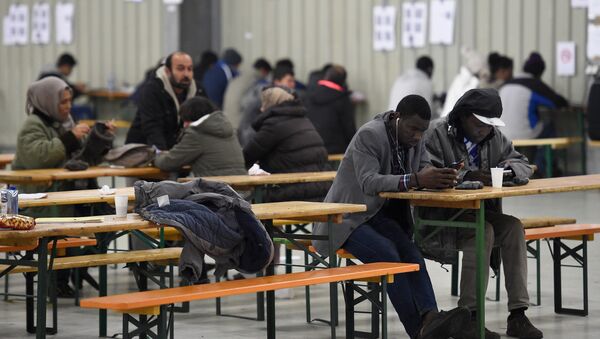 MOSCOW (Sputnik) — According to a survey carried out by the UK-based Populus research consultancy exclusively for Sputnik and published earlier in the day, more than every second European and United States respondent answering the questionnaire opposes allowing refugees into their country.

"We are not xenophobes, but we have very high unemployment. We want to welcome Syrian political refugees, but providing them employment – is a real problem. In France unemployment is around 10 percent," Emmanuel Faye, professor of philosophy at University of Rouen, said.

The poll also revealed that Western European citizens were more accepting than their Eastern neighbors when it came to accepting the tens of thousands of refugees flooding in to their country.

What to Do With 'These People'? So Many EU Meetings Later and Still No Clue
Joaquin Roy, the Director of the European Union Center at the University of Miami, believes the difference in attitudes between eastern and western Europe amid the crisis comes as "most of the Eastern countries have less economic resources to meet obligations."

Germany has granted asylum to some 600,000 people since the start of the year, with an estimated 10,000 refugees crossing into the country every day, according to the Foreign Ministry.

"The German economic situation is relatively good as compared to other countries, and this provokes jealousy from other countries," Keller said, adding that some social problems still affect the discourse on asylum seekers in the country.

Europe has been struggling to manage a major influx of migrants fleeing war-torn countries in the Middle East and North Africa. Over 710,000 migrants have arrived in the European Union within the first nine months of 2015, according to the EU border agency Frontex.

In September, EU interior ministers approved a plan to redistribute some 160,000 refugees throughout the bloc under a quota system.

Several countries, including Hungary, the Czech Republic and Slovakia, oppose the resettlement plan. These counties were criticized for what has been labeled their inhumane treatment of refugees.