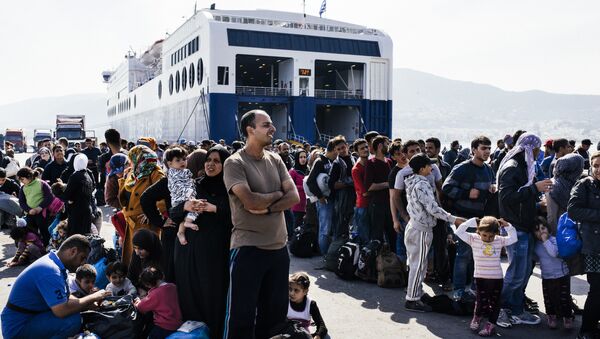 © AFP 2023 / DIMITAR DILKOFF
Subscribe
International
India
Africa
A recent Sputnik.Polls survey, which was carried out in the United States and European countries by the UK-based Populus research and strategy consultancy for Sputnik International News Agency and Radio, showed that over 51 percent of respondents do not want their respective governments to take in refugees.

MOSCOW (Sputnik) — When asked whether their governments should accept refugees or not, 62 percent of respondents in Eastern Europe, specifically Hungary, Bulgaria, the Czech Republic, and Poland, which are transit countries for migrants, said that their countries should not do so. In Western Europe (Germany, France, and Great Britain), those opposing initiatives aimed at receiving migrants were fewer, at 42 percent.

The Czech Republic, Hungary and Bulgaria had the highest share of respondents against accepting refugees, at 73 percent, 63 percent and 62 percent, respectively, while in the United States, 35 percent of the respondents were against refugees. That said, Hungary and Bulgaria are among the top 10 countries in terms of the number of refugees they have accepted per 1 million people. Germany had the highest number (58 percent) of those who said that their government should take in refugees.

The poll was conducted by Populus between September 25 and October 15, 2015. The sample, representative of the general population in terms of gender, age and geographic location, included 8,000 respondents in total or 1,000 per country (Great Britain, the US, Germany, France, Bulgaria, Hungary, the Czech Republic and Poland). The confidence interval for the nationwide data was +/-3.1 percent, with a confidence level of 95 percent.

The international public opinion project kicked off in January 2015, in partnership with Populus, reputable British pollster. The project involves regular surveys in the United States and Europe on the most sensitive social and political issues.