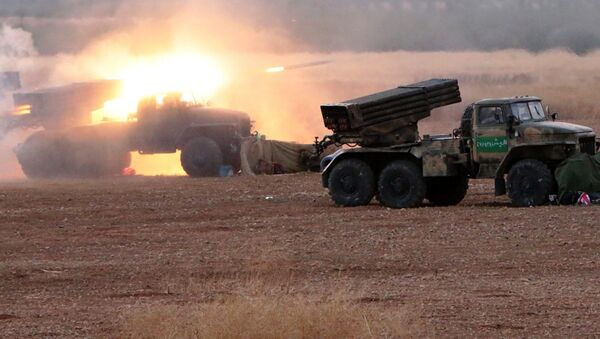 The Syrian army continues its large-scale offensive on terrorist positions in a number of provinces, taking hold of key heights near the Turkish border, an army spokesman said Monday.

Syrian Forces Poised to Retake Aleppo From Terrorists in 'Decisive Battle'
JABLA (Sputnik) — According to Brigadier General Ali Mayhoub, the government troops supported by local militia attacked ISIL positions in the Homs and the Aleppo provinces, liberating two villages to the north of Homs and five villages to the south of Aleppo.

"As a result of the attacks on the militants' positions, dozens of terrorists have been killed or wounded," Mayhoub said.Mayhoub said.

"Our armed forces have also carried out combat missions in the Salma-Joub al-Ahmar area [near the Turkish border], taking control of key heights," the general added.