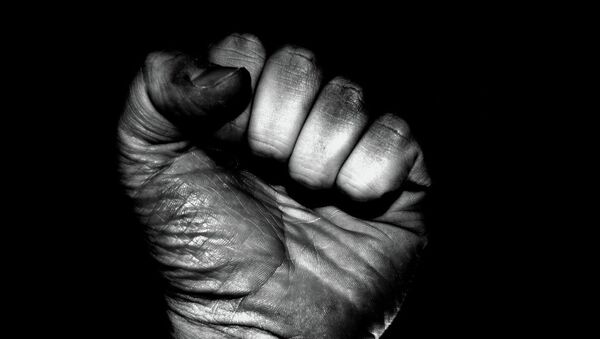 An unusual experiment with cadaver arms showed that the evolution of our hands may be linked to a propensity for violence in humans and other species.

The controversial findings connecting human physiology with a violent past were released earlier this week in the Journal of Experimental Biology and have already provoked a heated debate.

The human hand did evolve differently compared to primates. Our species has a shorter palm, shorter fingers and a relatively longer thumb. It is widely believed that these changes stem from the need to create and manipulate tools.

Science & Tech
Paralyzed Man With Special Brain Implant Moves Arm Mentally
However, a team of scientists led by comparative physiologist at the University of Utah, David Carrier, has challenged this theory with their own. They noticed that the shape of the human fist makes it particularly convenient to throw punches and assumed that our hands may have become the way they are specifically for a pugnacious purpose. The tests they have conducted show that it may actually be the case.

The idea was born in a dispute between Carrier and Frank Fish, a biomechanist at West Chester University in Pennsylvania, which happened at a conference a few years ago. They scientists were arguing over whether the sperm whale’s bulging head had developed for ramming other male whales to compete for potential mates. Fish was against this assumption and balled up his hand into a fist to make a point.

“Frank was waving his fist at my face,” Carrier said. “He was suggesting that the human hand did not evolve for fighting, and I thought, ‘Wait, maybe it did!’”

The incident inspired a peculiar scientific theory, and in an attempt to prove it the scientists from Carrier’s team conducted tests with the most unusual material — they obtained nine male arms from body donor programs and tied them with fishing line to keep the dead fists clenched.

Then the arms were attached to a pendulum and swung into dumbbells to simulate a punch. The researchers whaled the hands on the padded weight in three different positions — a clenched fist, an unclenched fist and an open-handed slap.

Science & Tech
As Good as New: ‘Bio-Cement’ Will Regenerate Bones!
As anticipated, the experiment revealed that the clenched fist lowers the risk of breakage.

“Our results suggest that humans can safely strike with 55% more force with a fully buttressed fist than with an unbuttressed fist,” Carrier and his colleagues wrote.

The research met a great deal of skepticism. Some scientists noted that there are other parts which humans have that can easily be used in a fight — feet, knees and elbows. But it doesn’t mean they all evolved for that purpose.

Others, however, recalled Carrier’s previous work suggesting that early human faces evolved to withstand and deflect blows. They admitted that even though the “corpse hands” experiment by itself wasn’t very convincing, the authors are building “an increasingly convincing case.”