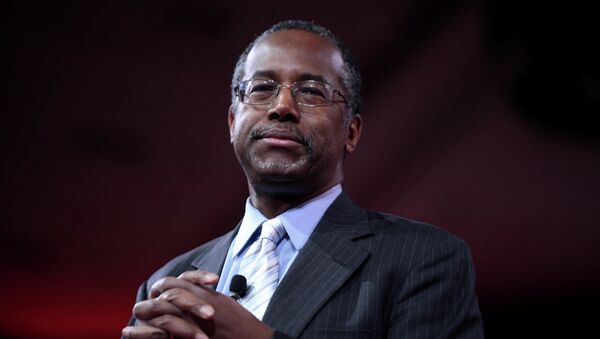 © Flickr / Gage Skidmore
Subscribe
International
India
Africa
In a shocking revelation, Republican presidential candidate Ben Carson, who is leading the GOP’s race for the White House over Donald Trump in Iowa, has admitted that as a teenager he was extremely violent, confessing he “would go after people with rocks, and bricks, and baseball bats, and hammers”

In an interview with NBC’s Meet the Press, Carson answered critics — including his competitor Donald Trump — who have accused him of being sluggish and low-energy.

“We have a breaking story. Donald Trump has fallen to second place behind Ben Carson. We informed Ben, but he was sleeping,” Trump stated on Friday, mocking the state of Iowa’s new GOP frontrunner.

Carson initially responded by reminding viewers that he is a retired neurosurgeon who can separate conjoined twins, in case anyone forgot.  “I will tell you, in terms of energy, I’m not sure that there’s anybody else running who’s spent 18 or 20 hours intently operating on somebody,” he stated.

Then things got weird, as he shifted gears to discuss the time he tried to stab someone, in perhaps one of the oddest defenses the US has seen yet on the campaign trail.

“I am soft-spoken. I do have a tendency to be relaxed. I wasn’t always like that. There was a time when I was, you know, very volatile. But, you know, I changed,” Carson said.

“As a teenager, I would go after people with rocks, and bricks, and baseball bats, and hammers. And, of course, many people know the story when I was 14 and I tried to stab someone. And, you know, fortunately … my life has been changed. And I’m a very different person now.”

The person he threatened with a hammer was his own mother, and the friend he stabbed was saved by his belt buckle.

When asked about abortion, Carson went on to compare the medical procedure to slavery, and stated that he would appoint Supreme Court judges to overturn the 1973 Roe v. Wade decision that made abortion legal in the US.

“During slavery – and I know that’s one of those words you’re not supposed to say, but I’m saying it. During slavery, a lot of the slave owners thought that they had the right to do whatever they wanted to that slave,” he stated.

Carson has also said the Affordable Care Act (also known as “Obamacare”) is the worst thing to happen to the US since slavery, and in August invoked Nazi Germany to denounce Planned Parenthood.