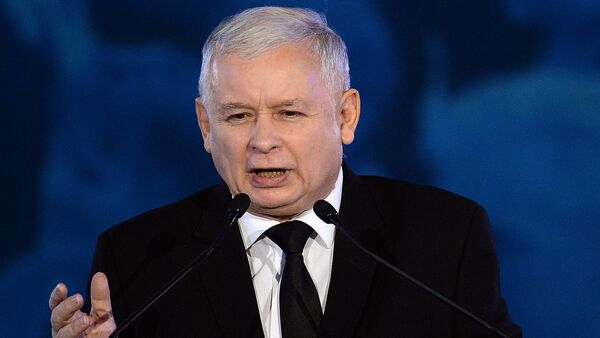 © AFP 2021 / JANEK SKARZYNSKI
Subscribe
The victory of the nationalist Law and Justice party in Poland will complicate the country's relations with the European Union, the chairman of Russia’s upper house Committee for Foreign Affairs said Monday.

The eurosceptic Law and Justice party, led by former Polish Prime Minister Jaroslaw Kaczynski, is said to have won the elections, with almost 38 percent of the vote and a projected 232 seats in the 460-member lower chamber, according to exit poll data from the pollster IPSOS.

According to Konstantin Kosachev, it is well-known that the party has long held anti-Russian positions, which is why he does not expect any fundamental changes in the two countries' bilateral relations.

"When it comes to relations with the European Union [on the refugee crisis] and Ukraine [on the restitution of Polish property in Ukraine], one can predict severe aggravation, at least at the initial stage of the Law and Justice’s time in power," Kosachev told RIA Novosti.

Poland’s Law and Justice has previously signaled its opposition to the relocation of refugees from the Middle East and North Africa within the European Union.

"A party that stands at clearly defined nationalist positions and, which traditionally explains all the issues the country is facing by external factors, came out victorious [in the elections] in Poland," Konstantin Kosachev said.

000000
Popular comments
Concerning to Russia Poland will keep it"s confrontation politic even if Poland did became a German Colony and they like .. and they like also as polish are treated in germany and in england like much of times like pigs but polish like as they liked Hitler not making an agreement with Russia before WWII ... polish expected to receive teschen zone as a prize from Hitler after he takes over Chekoslovaquia ... but it didn t happen that way as ee know and if now Polish thinks to get something from Germany they can waite seated germany will suck everything they can from Polish and we know that a dog to please its master became worst than the master itself so is that the Polish case . A good doggie at German orders ... and gernany knows that a dog that barths doesn't bite .. germany loves those pussy pussy doggies that we can find in every european countries full of politicians but all without balls ... :)