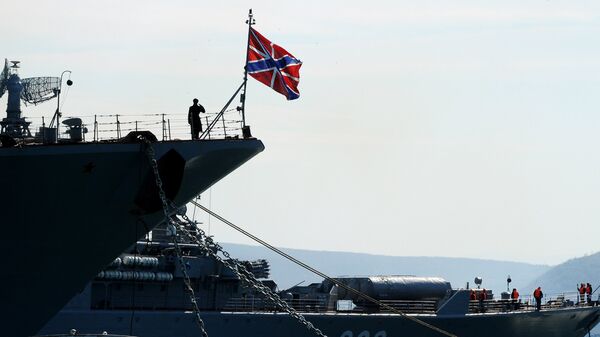 © AFP 2023 / OLGA MALTSEVA
Subscribe
International
India
Africa
NATO may not be that mighty after all, according to US Navy Adm. John Richardson, who urged the alliance to update its naval strategy, at the same time raising alarm over Russia’s “growing prowess” and lamenting that it “threatens the ability of the US and its allies to operate in the Black and Baltic Seas.”

World
One Way No More: NATO Rings Alarm Over Russia’s Might in Mediterranean
Russia has demonstrated growing prowess with its ships and demonstrated a willingness to use military coercion, The Wall Street Journal quotes US Navy Adm. John Richardson, who recently became Chief of Naval Operations, as saying at a meeting in Venice with the top naval officers of Europe.

“Their operational tempo has risen to levels not seen in over a decade,” the US Navy Chief said, sounding obviously alarmed. “Their proficiency is increasing.”

Adm. Richardson is worried that Russia may now be able to challenge US' military in “anti-access, area denial,” the newspaper said, explaining that this military term refers to “the ability of a country to restrict the US from conducting operations in a specific area.”

He therefore called on NATO to “reexamine its maritime strategy to see if it adequately describes the problem set that we have got.”

According to the newspaper, US military officials have been increasingly alarmed over the build-up of Russian military capability in Crimea and in the Russian enclave of Kaliningrad. Russian missiles and naval power there could threaten the ability of the US and its allies to operate in the Black and Baltic Seas.

The regional navies, he added, need to make sure that the most the appropriate ships are assigned to the best missions, but to also that navy ships work on multiple missions at once. For example, a ship on patrol for migrant smugglers can also collect information on any Russian presence in the Mediterranean.

“You want to make sure everyone is contributing to their maximum capability and we are not assigning a high-end warship exclusively to migrant duty,” he said.