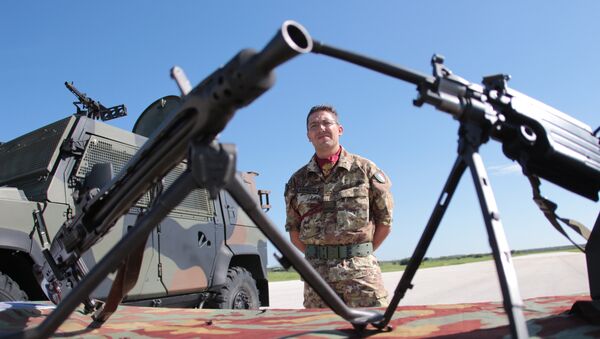 Hundreds of people in the Portuguese capital Lisbon Saturday participated in a protest against NATO and especially military exercises Trident Juncture 2015, the organization's largest in decades.

Recently NATO was not high on the agenda in Portugal. However, since the successful performance of the left in legislative elections earlier this month, the question of the country’s exit from the military alliance has been raised: the Communist Party (PCP) and the Left Bloc have long been concerned with the issue. 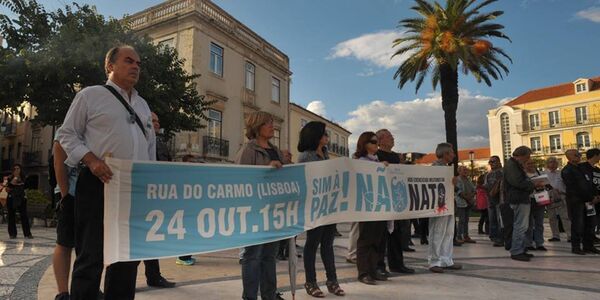 Appeal to participate in the October 24 demonstration held in Setúbal on October 20
© Photo : cppc.pt

The demonstration was initiated by several civic organizations, including the General Confederation of Portuguese Workers – National Intersindical (CGTP-IN), the Portuguese Council for Peace and Cooperation (CPPC), the Democratic Movement of Women (MDM), the Portuguese Union of Antifascist Resistance (URAP), the Portugal-Cuba Friendship Association (AMPC) and others.

The head of the General Confederation of the Portuguese Workers, Ana Pires, in an exclusive interview told Sputnik about the aim of the protest.

“This event, although not nationwide, is not isolated," she said. "In recent months, we have had several meetings and colloquiums in Lisbon, Porto and Setubal to denounce and raise awareness on this issue. The trade union movement is very attentive to the case.”

“We have to give the alert because when there is a war, the people and the workers suffer most. Furthermore, the Portuguese constitution provides withdrawal from NATO. We express our repudiation for conducting the NATO military exercises, held in Portugal, Spain and Italy until November 6,” she told Sputnik.

In a recent communique, the Portuguese Council for Peace and Cooperation, also strongly condemned the exercises.

“In the framework of increasing aggression and expansionism, NATO holds in Portugal, Spain and Italy between 4 October and 6 November the largest military exercises in decades. These exercises take place at a time when there have been multiple situations of tension, conflict and war, including ones in Europe, and increased insecurity and international instability," they said.

“Committed to the cause of peace, cooperation, progress, social justice and repudiating these maneuvers, involving the national territory and Portuguese military forces, dozens of organizations from different fields of expertise have teamed up to give public expression for the…
·         rejection of the participation of forces in military aggression of NATO on other peoples,
·         urgency of the dissolution of NATO,
·         end of nuclear weapons and weapons of mass destruction,
·         end of the existence of foreign military bases
·         general and controlled disarmament
·         call to the Portuguese authorities to comply with the decisions of the Portuguese Constitution and … international law,” the communique reads.

While Russian Warplanes Bomb Terrorists, NATO Gets Stuck on a Sandy Beach
Approximately 36,000 personnel from over 30 NATO and partner nations are participating in the NATO Trident Juncture drills taking place from October 3 to November 6 in Spain, Italy, and Portugal, as well as in the Mediterranean Sea and the Atlantic Ocean.

The Observador reports the Trident Juncture on its first day limited Portuguese air traffic by 25% and disrupted work of major airports.

The massive exercises have also triggered protests in other countries. A group of Spanish activists called the Conscientious Objection Movement (MOC) told Sputnik last week that they had blocked the passage of military equipment bound for NATO maneuvers in the city Zaragoza, where some 9,000 NATO soldiers are accommodated, from the port of Sagunto in Valencia.