Again on the Table: Washington Weighs Pros and Cons of Syria No-Fly Zone 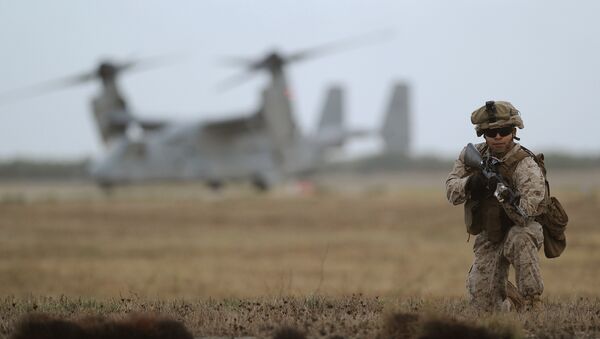 © AFP 2021 / CRISTINA QUICLER
Subscribe
The Obama administration is reportedly embroiled in a new debate on the potential creation of no-fly zones and 'safe havens' in Syria.

Russia-Syria Cooperation Should Not Prevent US From Working With Moscow
The establishment of no-fly zones and safe havens in Syria topped the agenda of a White House meeting earlier this week, the New York Times reported, citing sources in the White House.

During the October 18 gathering, US Secretary of State John Kerry and a number of other high-ranking officials approved the idea, while Pentagon chief Ashton Carter pointed to the extensive military resources required to enforce such zones in Syria.

So now the US wants to create a No fly zone in Syria. Funny how US keeps IS behind Their backs?! US has had their chances,now Russias Turn!

Also on the meeting's agenda was establishing safe zones to render humanitarian aid to civilians, based on Syria's borders with Turkey and Jordan.

The meeting came just two weeks after White House Press Secretary Josh Earnest dismissed the idea of creating a no-fly zone in Syria, which he said would distract the US-led coalition from the fight against Islamic State militants.

Hillary doesn't get that a no fly zone in Syria escalates with Russia (needlessly) and marches us towards WWIII. #DemDebate

Previously, Turkey had proposed a buffer zone in northern Syria, but the United States and NATO did not support this initiative.

On October 5, the Financial Times newspaper reported, in turn, that the Russian operation in Syria had disrupted the implementation of Washington's plans to establish a no-fly zone over the territory of Syria.