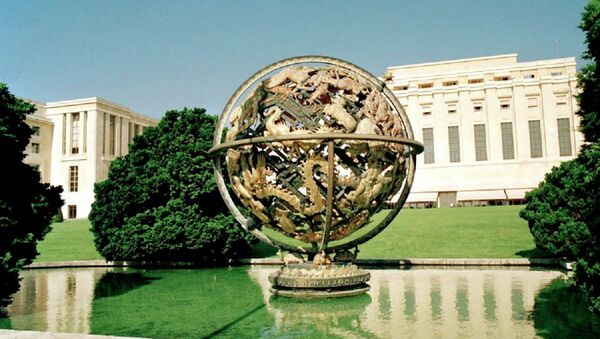 © Flickr / United Nations Photo
Subscribe
The United Nations has achieved more than its critics like to admit in the 70 years since World War Two, improving the overall standards of life globally, the director-general of the UN Office in Geneva said.

UN Official Slams World Bank's 'Deeply Troubling' Approach to Human Rights
GENEVA (Sputnik) – Moller gave an interview to RIA Novosti ahead of the celebrations to mark the 70th anniversary of UN’s founding in 1945. Asked if the 193-nation union had been able to reach its initial goals, UN Geneva Office head Michael Moller replied, "Absolutely, and has reached it even more than most people realize."

Moller stressed he was absolutely certain that the global community would not be where it is today if it had not been for the UN-led international system that emerged after the end of World War II.

"If you look at where we are as a human race in physical terms, we have never ever in our history had it so good. We live longer, we live better, we eat better, we die less," he said.

The global poverty rate has been reduced by half, and infant mortality has been cut in half in less than 15 years, according to UN’s estimates.

On the subject of the ongoing conflict in Syria, Moller said, "It’s all very well to say that we are not solving the problem. And we are not."

Yet UN relief agencies have been able to help people on the ground despite fierce battles, he stressed.

Even at the height of the crisis, the United Nations' World Food Programme has been distributing millions of food rations, the refugee agency UNHCR has been taking care of millions of asylum seekers, while the children's advocacy body UNICEF has been vaccinating millions of infants.

"The system itself actually continues to function to make the life of people better every day," the Geneva chief said.

More than 250,000 people have died during four and a half years of the Syrian civil war. Around 11 million have been displaced, four million of whom have fled abroad in an attempt to escape the violence.

Moving the United Nation’s main headquarters to a neutral nation like Switzerland might potentially politicize task-oriented UN agencies that unite people based on their common goals and not political views, the director general of the UN Office in Geneva said.

Michael Moller was commenting on a letter to UN Secretary-General Ban Ki-moon from a Russian lawmaker who proposed relocating the UN headquarters to Geneva from New York City, citing Washington's influence on the international mediating body.

The head of the UN Office in Geneva stressed in an interview with RIA Novosti that a "big difference" between the UN headquarters in Geneva and in New York City is that Geneva serves as the UN's operational hub.

"It is non-politicized to a large extent, except if you look away from the UN Human Rights Council," Moller said. "If you were to bring the Security Council and everything else here you would potentially politicize the work that is done in technical agencies to an extent where it would make it less efficient."

Moller pointed to the World Meteorological Organization, the UN weather agency, as an example where people "speak the same language and base their decisions on facts and technical needs," rather than acting like politicians or diplomats.

UN member states need to realize that the power to bring peace lies in their own hands, rather than with UN executives, the director-general of the UN Office in Geneva said.

Michael Moller, the head of the UN Secretariat in Europe, in an interview with RIA Novosti rebuked criticism that the 193-nation organization was not fulfilling its duty to prevent wars and settle crises, saying it was up to UN member states to make decisions and act on them.

"The UN is two things. One thing is the Secretariat, people like me, who implement the decisions of member states. But the backbone, the heart of the UN are the member states," Moller stressed. "So when people tell me that the UN is not doing its role — it is the member states that are not doing their role."

Moller said the United Nations was still to blame for continued tensions in the Middle East, but only to an extent, because it was ultimately caused by UN member states not being able to put aside their differences and work together.

"Even when they do take decisions they do not act on them sometimes and they cannot agree on the course of action," the UN Geneva Office head said in reference to the ongoing Middle East crisis.

The UN system of maintaining peace is as effective as UN nations are in their ability to cooperate, according to Moller.

Moller spoke ahead of the United Nation’s 70th anniversary this Saturday, when the union will be looking back on its long history and taking stock of the achievements it has had since the end of World War II.