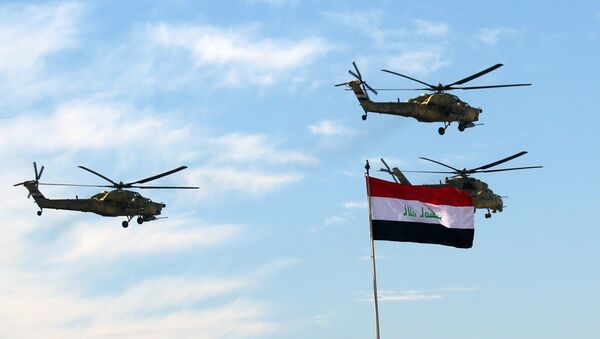 Russia will consider Iraq's request to provide military assistance in fighting terrorism, should it be made, taking into account its national interests and security, Russian parliamentary speaker Valentina Matvienko said in an interview published on Friday.

Iraqi Lawmakers to Visit Russia in November for Security Cooperation Talks
MOSCOW (Sputnik) – On Wednesday, a member of Iraq's State of Law Coalition told Sputnik the country's parliament was planning to vote on the issue of requesting the support of the Russian Aerospace Forces in fighting Islamic State (ISIL) by the end of October.

"We have only one criterion here: [to asses] to what extent such request corresponds with national interests of our country and its residents, and primarily the interests in security," Matvienko told the Russian Argumenty i Fakty newspaper.

Matvienko said Russia was seeking cooperation in the framework of a single international coalition in fighting with terrorists and noted "specific advances in coordination of actions among defense ministries."

Russia and Iraq, alongside Iran and Syria, created in late September the Baghdad Information Center to coordinate military actions against the ISIL extremist group.