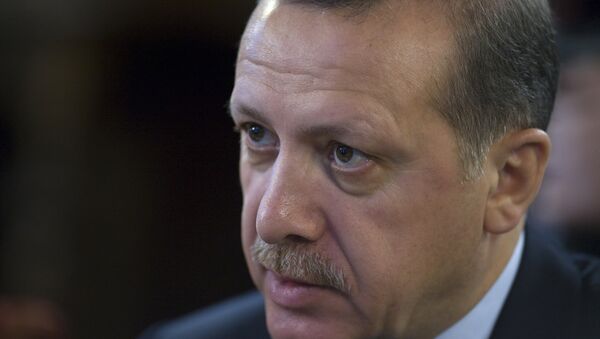 © Sputnik / Sergey Guneev
/
Go to the photo bank
Subscribe
The deputy chairman of Turkey's Nationalist Movement Party claims that the policy pursued by the Turkish government toward Syria has been a serious mistake.

ANKARA (Sputnik) — The policy pursued by the Turkish government toward Syria has been a serious mistake, the deputy chairman of Turkey's Nationalist Movement Party (MHP) said Friday.

Turkey is one of the countries calling for the current Syrian president resignation.

"Turkey’s Syrian policy has long been criticized within the society. Although the Syrian leadership is acting by dictatorial methods, interference in the internal affairs of another country, supporting one of the warring sides is a profound mistake," Atila Kaya told RIA Novosti.

According to him, meddling in the Syrian conflict has caused millions of Syrians to flee their homes and arrive in Turkey.

"The attacks similar to those that occur in Iraq and Syria — the bombings in Reyhanli, Suruc and Ankara — all these terror attacks are the outcomes of Turkey's interference in the Syrian affairs," he added.

Putin Briefs Turkish Leader on Meeting With Syria's Assad
The Turkish nationalist party stands for the territorial integrity of Syria, and urges Russia to be careful while launching airstrikes on ISIL positions, fearing the Syrian Turkmen tormented by both ISIL and the Kurdish Democratic Union Party might be targeted, Kaya noted.

"In this regard, the Russian Air Force, which has received approval of the Syrian government on the bombing terrorist targets, should be very careful about the Turkmen’s places of residence since they are the people, who have been hit from different sides," the politician stressed.

Since the beginning of Moscow's aerial campaign on September 30, the Russian Aerospace Forces have carried out some 830 strikes, killing several hundred militants and destroying dozens of command centers, and depots used by the terrorists.

Targets are selected on the basis of intelligence data collected and distributed among Russia, Syria, Iraq and Iran. The Ambassador of Syria to Russia Riyad Haddad previously confirmed that strikes are precisely terrorist armed groups and not by the opposition and the civilian population.

Earlier in October, Syrian Ambassador to Russia Ryad Haddad confirmed that the strikes were being carried out against armed terrorist organizations and not political opposition factions or civilians.