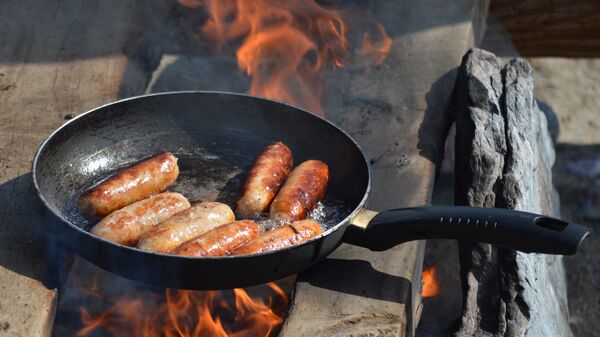 You think you are living a healthy lifestyle now that you’ve quit smoking? The World Health Organization has bad news for you: studies show that your favorite breakfast meats – bacon, ham, and sausage – may be just as carcinogenic as cigarettes.

Monsanto Battles California After State Labels Herbicide as Causing Cancer
The link between processed meat and cancer has been a matter of dispute for quite some time, and now the WHO may put the lid on the matter by putting bacon, ham, and sausages in the list of cancer-causing substances. The report is due out Monday, and could also spell bad news for fresh red meat.

The WHO's International Agency for Research on Cancer reportedly ranks processed meat alongside asbestos and cigarettes as most carcinogenic, with the highest of five possible rankings.

First Case of Cancer Triggered by Fukushima Recovery Confirmed in Japan
One reason could be haem, the compound that gives red meat its colour, which may damage the lining of the bowel. Also, when meat is kept for a longer period of time by smoking, salting or adding preservatives, cancer-causing substances can be formed.

Another cause could be the tendency of meat-eaters to eat fewer plant-based foods that protect against cancer. According to some studies, consuming meat with vegetables or a high fibre diet reduces the increased cancer risk.

"It is important to emphasize that the size of the effect is relatively small, and the mechanism is poorly defined," said Dr Ian Johnson, Emeritus Fellow at  the Institute of Food Research, according to the Telegraph.

"It is certainly very inappropriate to suggest that any adverse effect of bacon and sausages on the risk of bowel cancer is comparable to the dangers of tobacco smoke, which is loaded with known chemical carcinogens and increases the risk of lung cancer in cigarette smokers by around 20 fold."

"Avoiding red meat in the diet is not a protective strategy against cancer," said Professor Robert Pickard, Emeritus Professor of Neurobiology at the University of Cardiff. "The top priorities for cancer prevention remain smoking cessation, maintenance of normal body weight and avoidance of high alcohol intakes."

For what it's worth, eating less processed meats would be a good precautionary measure. The WCRF advises that people can reduce their bowel cancer risk by eating no more than 500g (cooked weight) of red meat per week.